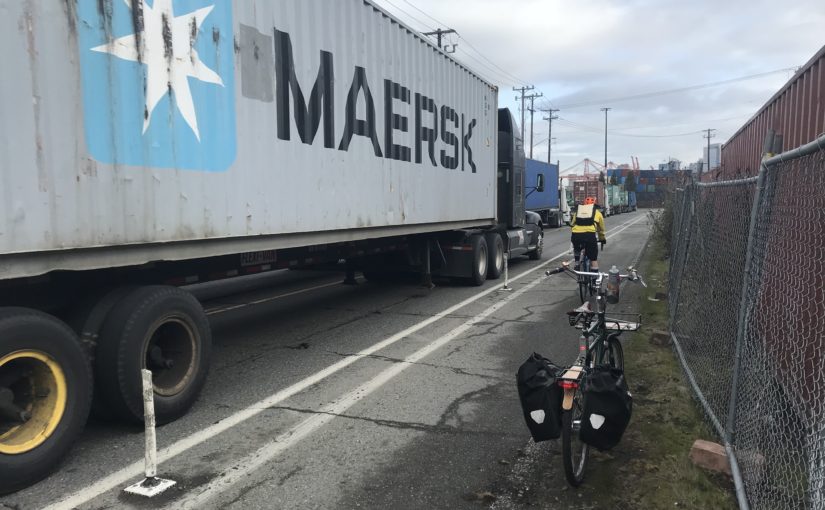 Lots of other people noticed the small section of truly physically protected bike lane south of downtown I recently pointed out on my Twitter. Even my little Twitter account got 65 ♥! 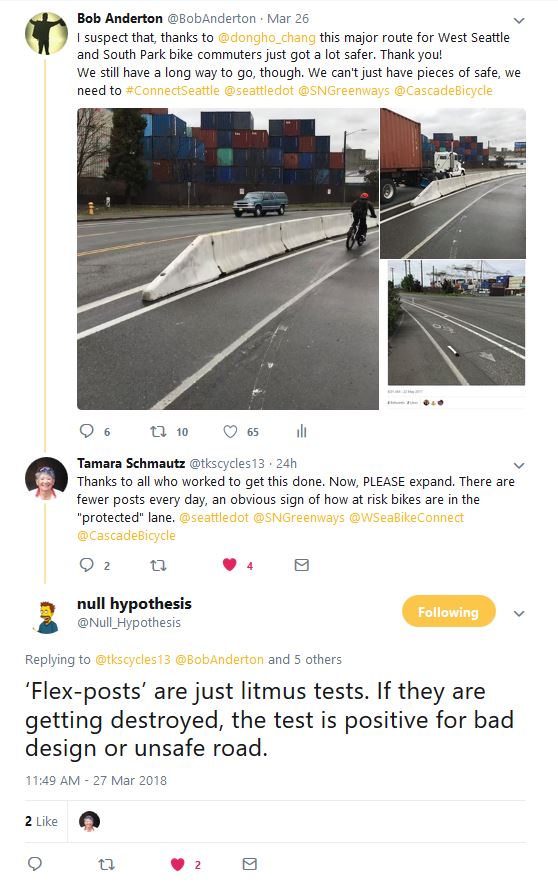 Here’s the deal, though, this section is still REALLY SCARY. Here’s the area just south of these Jersey Barriers (and hey, there’s even a few flex-posts left standing): 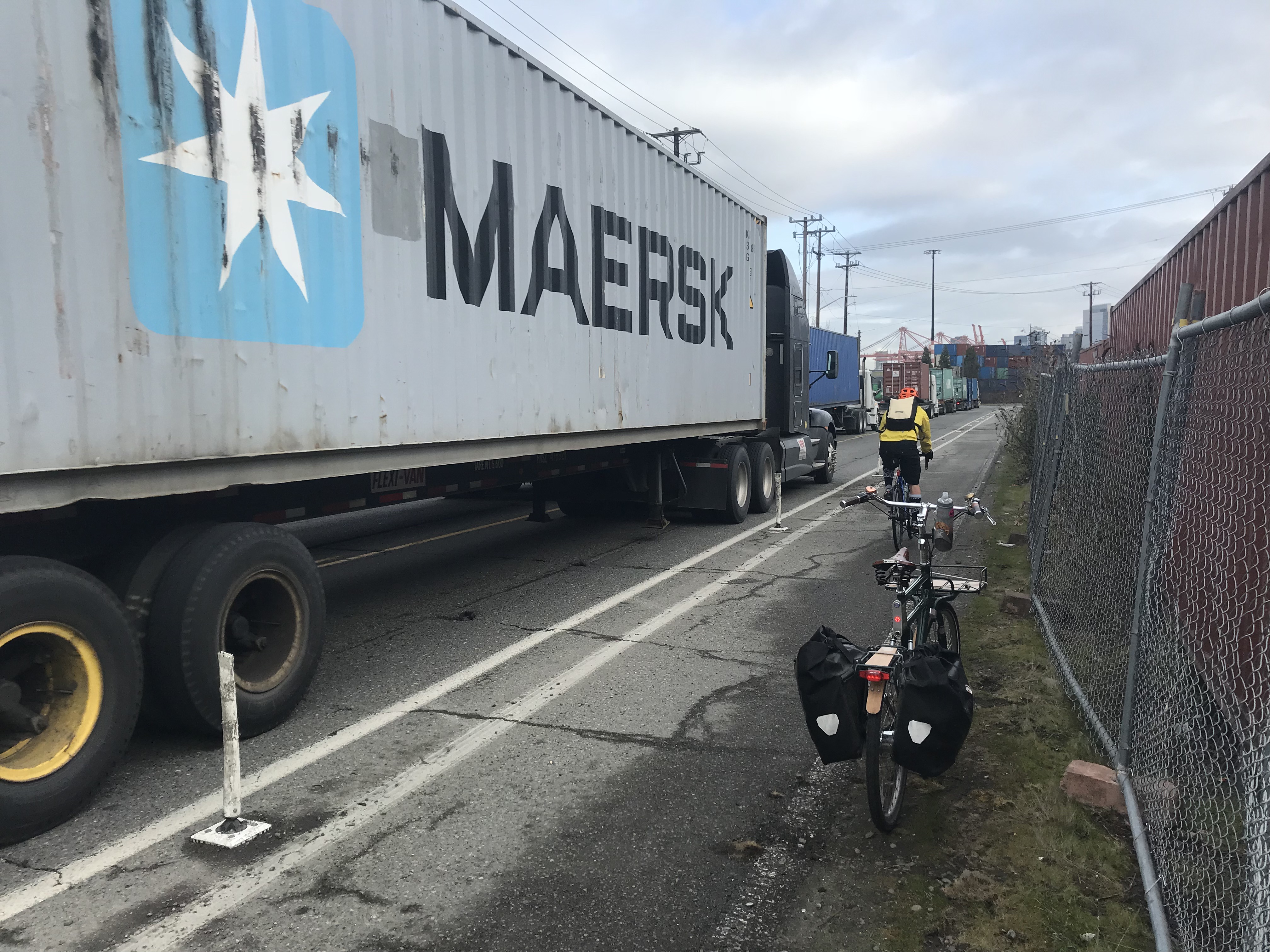 But what he linked to  hasn’t been updated since November of 2017.

Moreover, here is the fine print:

This is not acceptable. We already had one person killed on this key piece of bicycling infrastructure.

Let’s #ConnectSeattle and let’s do it BEFORE another person dies to motivate actual action. 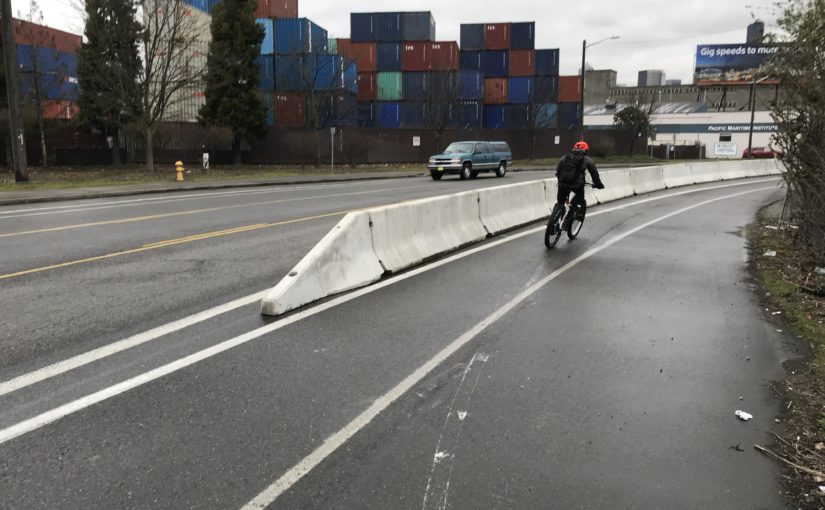 Washington Bike Law was the Title Sponsor of Bike Works‘ Annual Fundraising Dinner on Sunday.  I’m pretty sure that we weren’t the only ones who had a good time, but we did have a good time… and for a great cause.

If you don’t know about Bike Works, check it out!  And even if you do, check it out, it’s probably even more awesome than you thought.

Here is program director Tina Bechler who was “wheely” good in getting the crowd to realize how amazing Bike Work Programs are… along with the impressive youth who come through those programs: 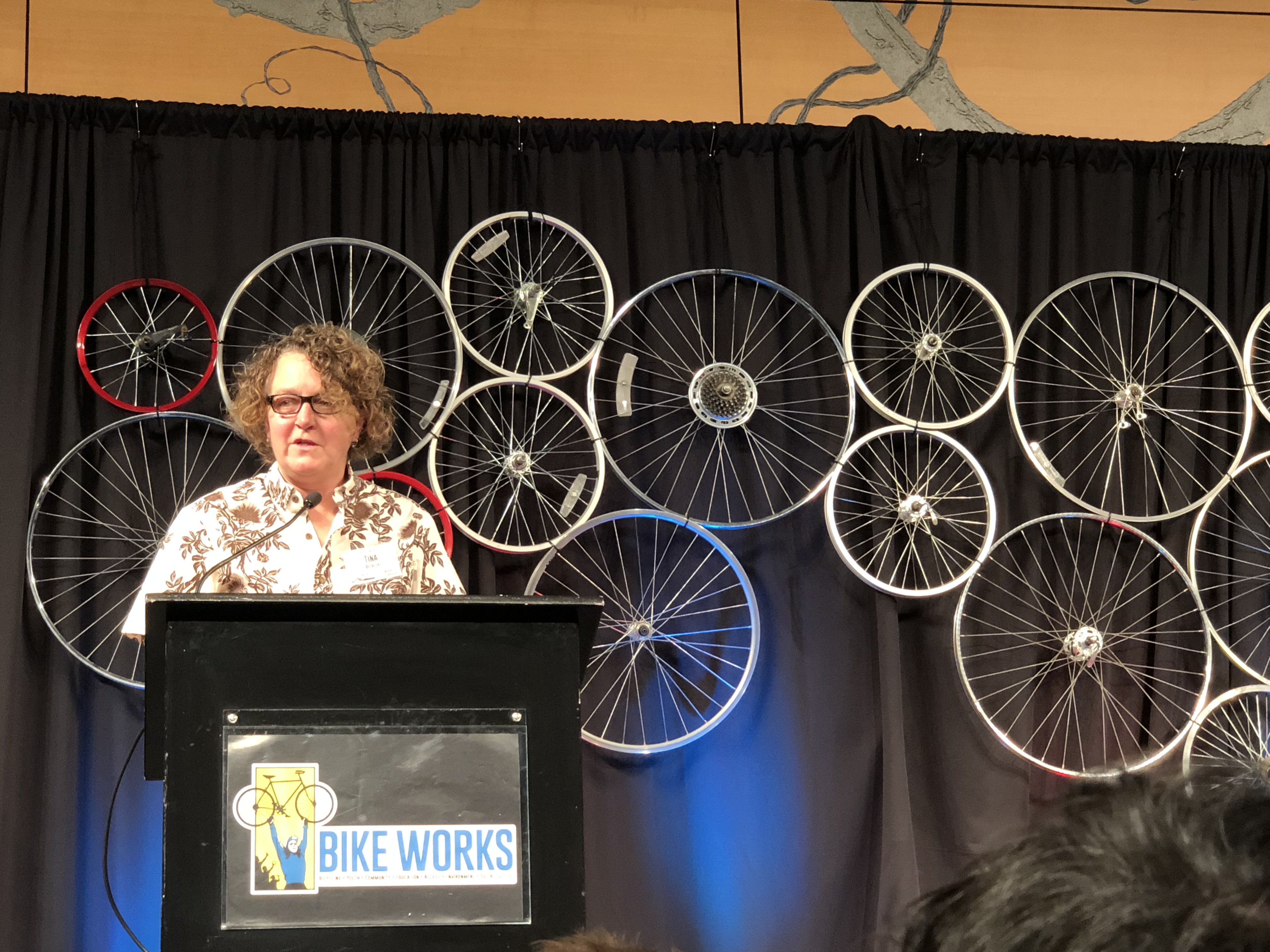 If you have a couple minutes, you should watch this video about Bike Works. It’s hard to convey how amazing this organization is, but this video shows it pretty well.

To top off this off, on my ride into work this morning, I found the the non-protective spring-loaded plastic cones on a fairly scary bike lane on East Marginal Way had been replaced by big cement barriers… Nice! 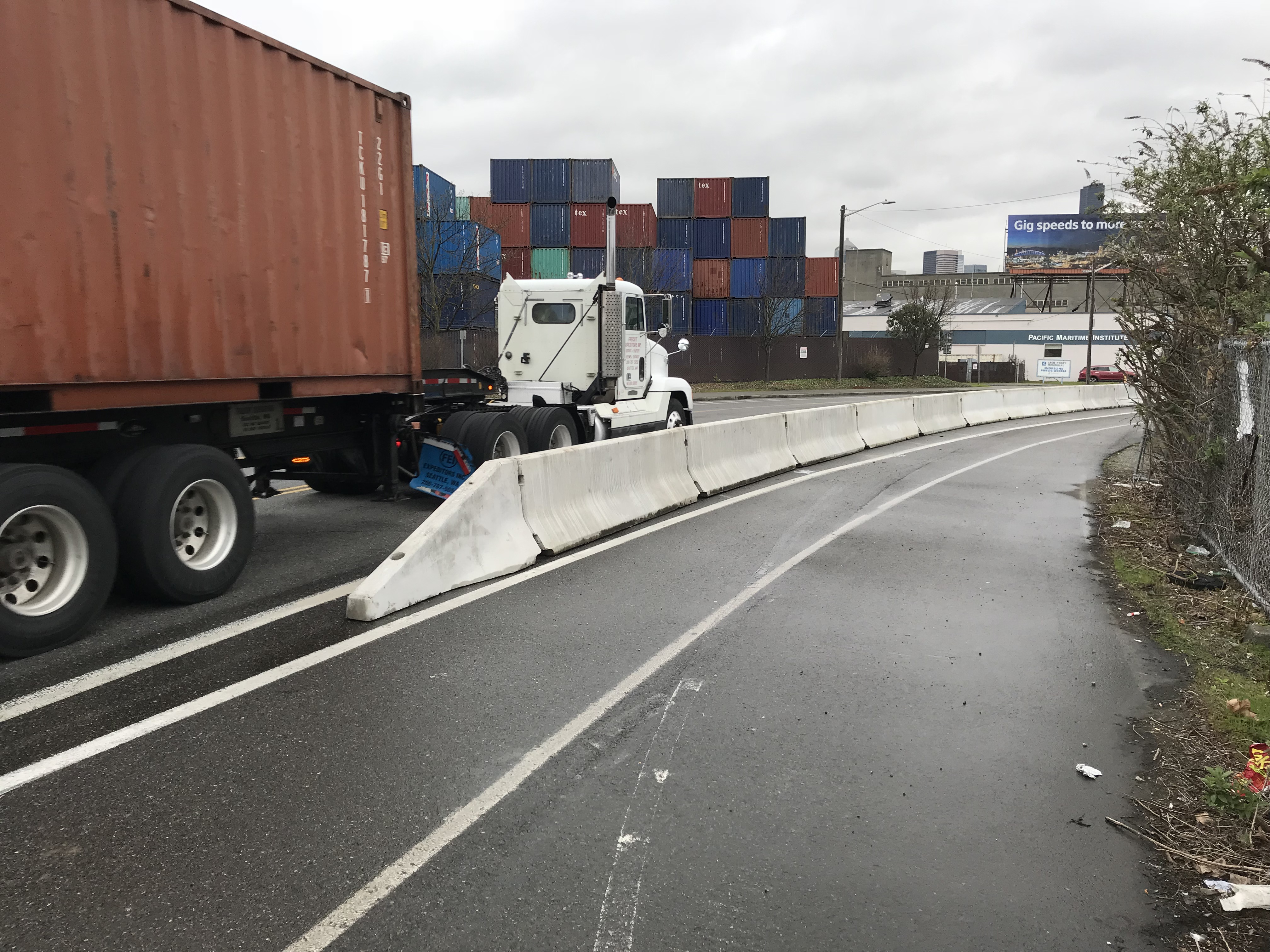 This is particularly pleasing because I had no faith in those cones as I watched them regularly get mowed down. 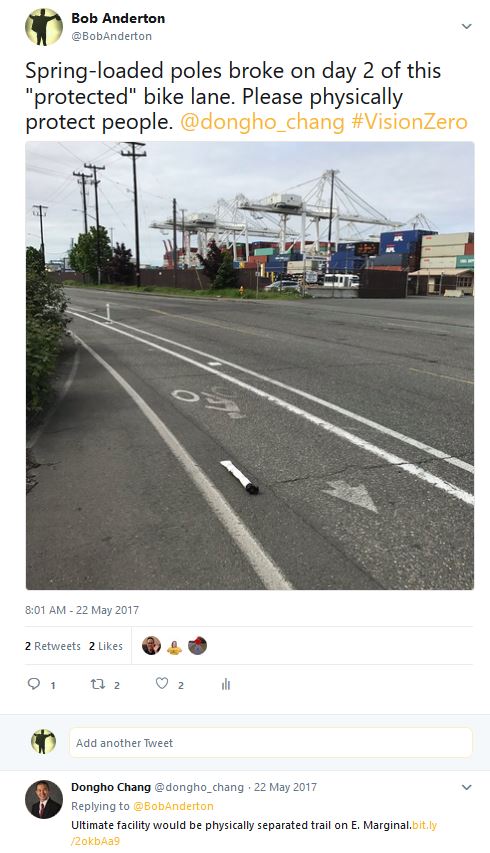 Thanks Dongho! Now let’s protect the rest of this route… and other routes so that everyone can feel safe riding in Seattle.

So, what does this song have to do with bikes? 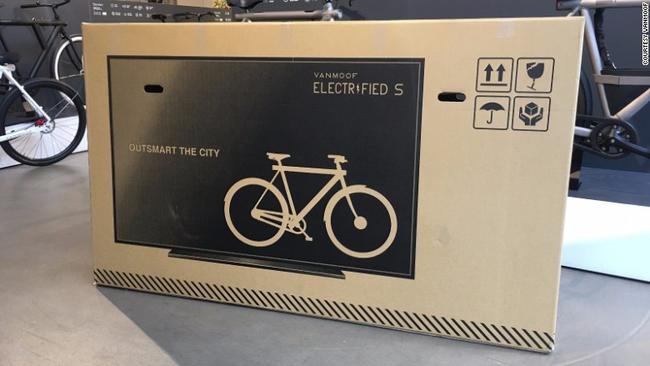 Apparently Tee Vee is STILL the thing here in the USA.

I learned from Bicycling Magazine (which basically lifted a CNN report) that Dutch bicycle manufacturer Vanmoof figured out how to solve a problem with damages in shipping.

More than 25 percent of its bikes were damaged in delivery. The problem was especially bad when shipping to the U.S.

The solution? Reconsider the packaging. “We asked ourselves, what do Americans really love? What would prompt couriers to be delicate with a parcel?” VanMoof co-founder Taco Carlier told CNN. Damages dropped by 80 percent since then, according to the company.
Inside this box… 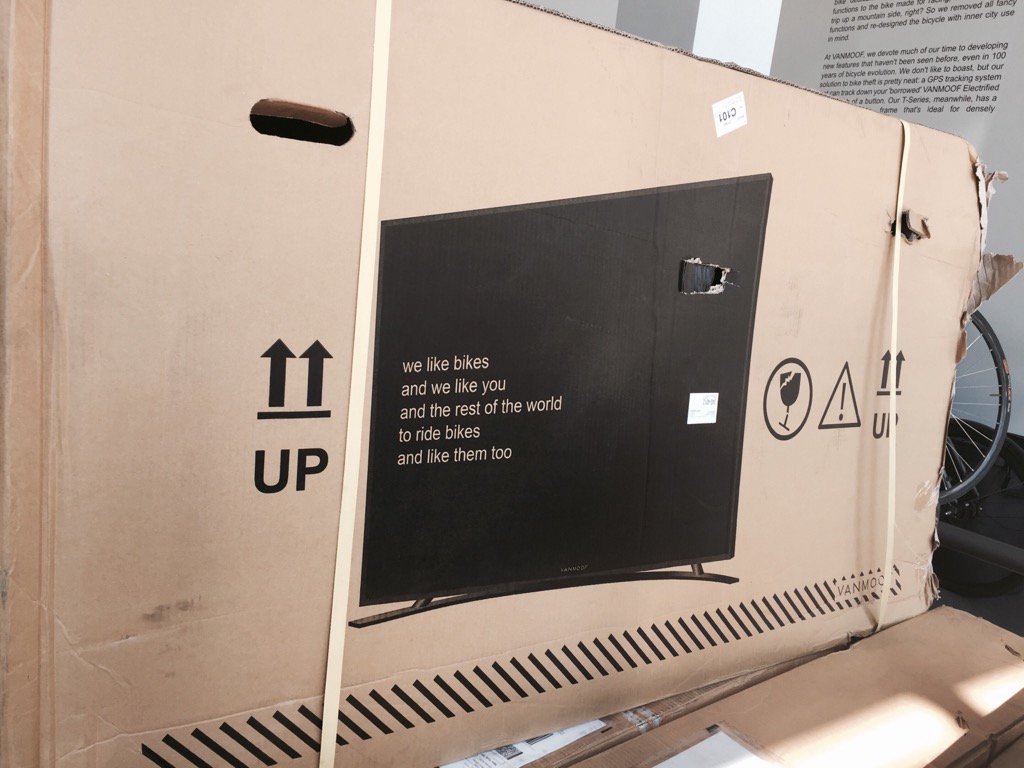 Is actually this bike: 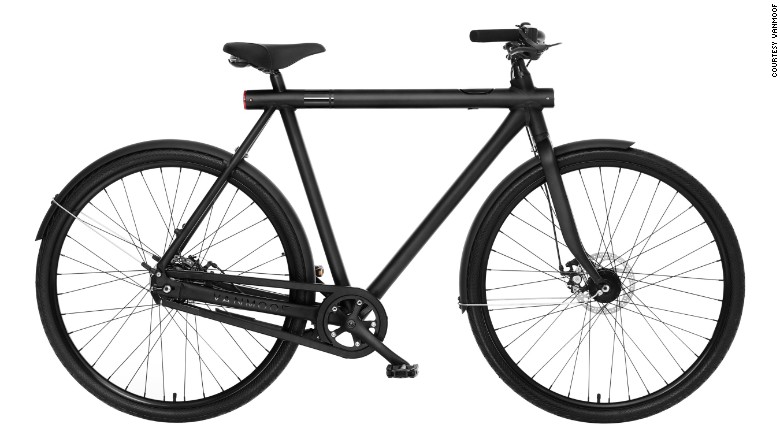 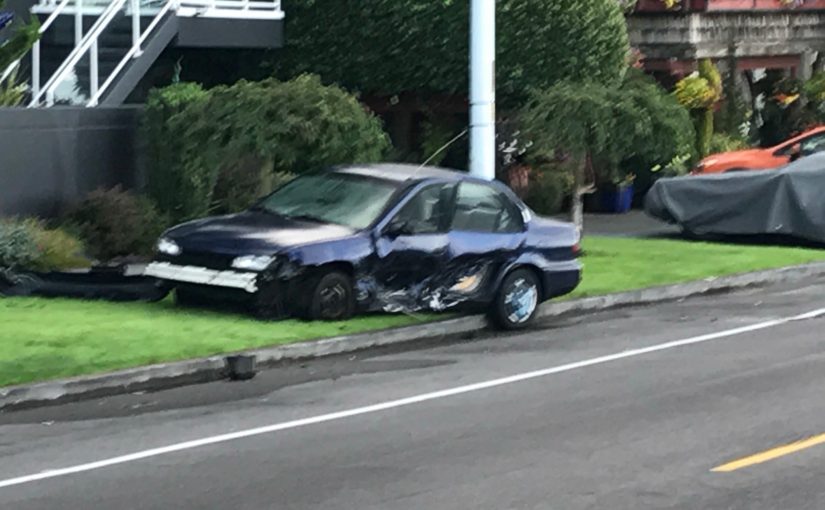 This morning on my ride to work I noticed a smashed up car pushed off the road along Alki Avenue. 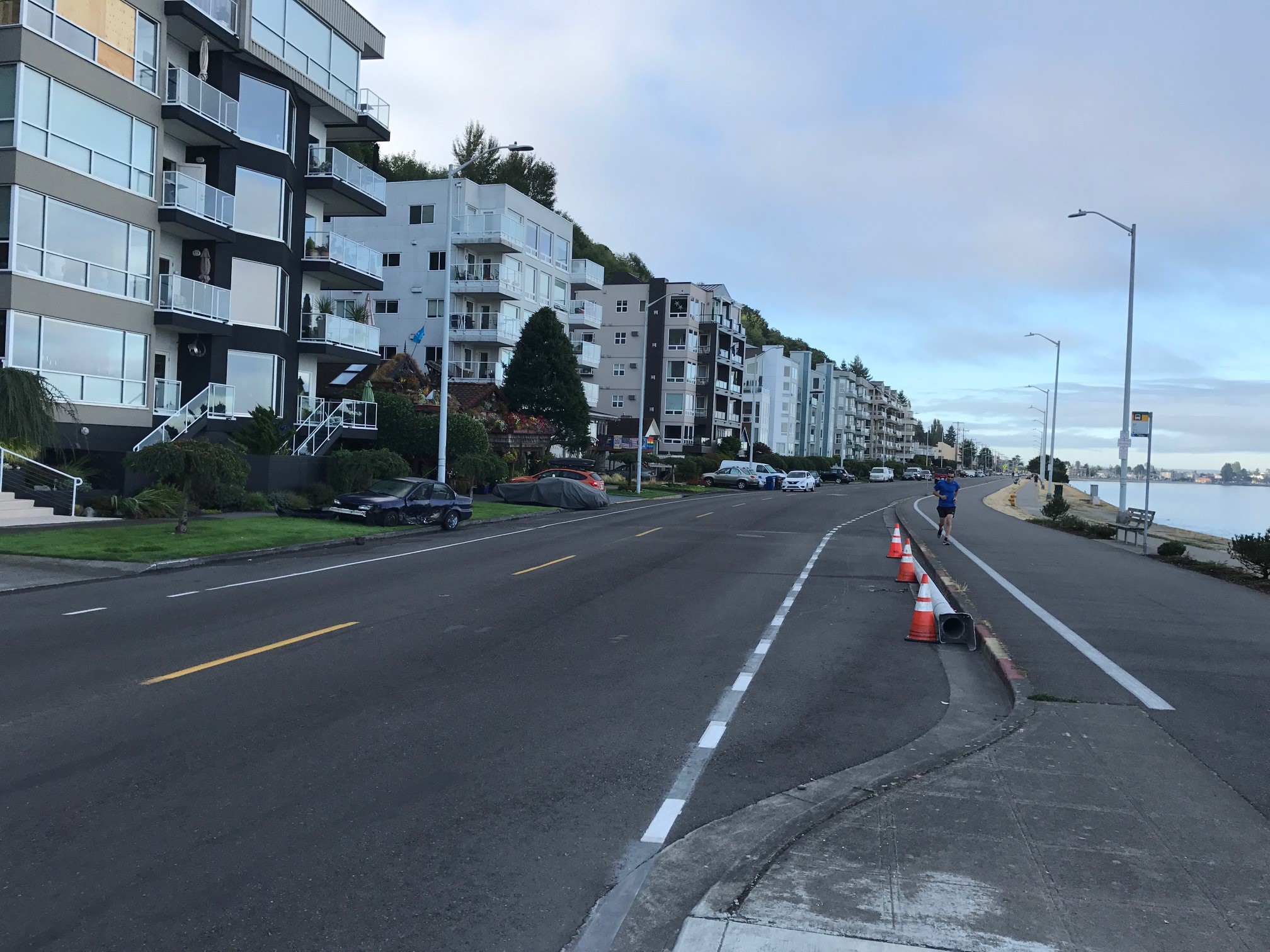 Someone had to be driving pretty fast to push a car off the road (or be pushed). 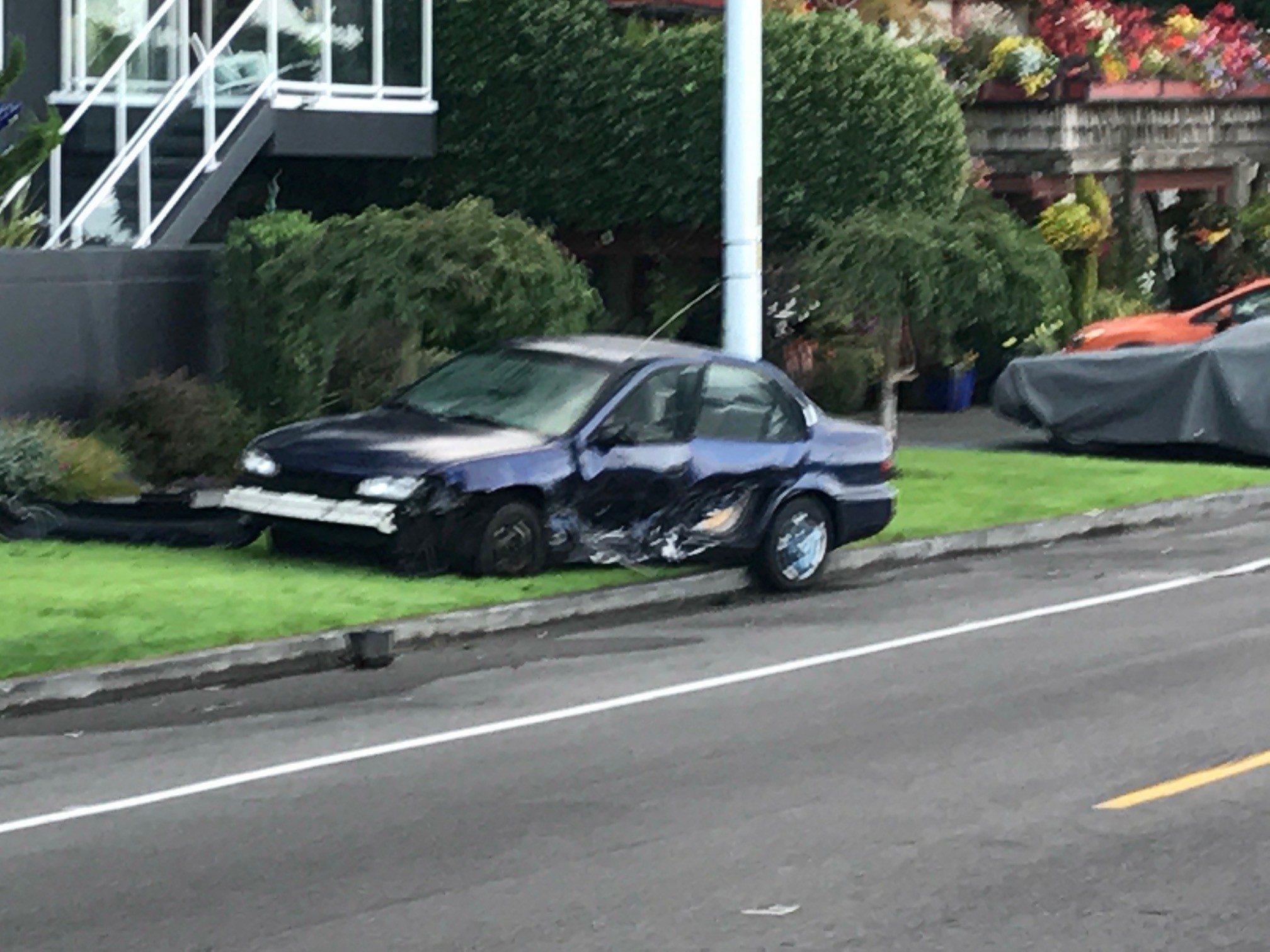 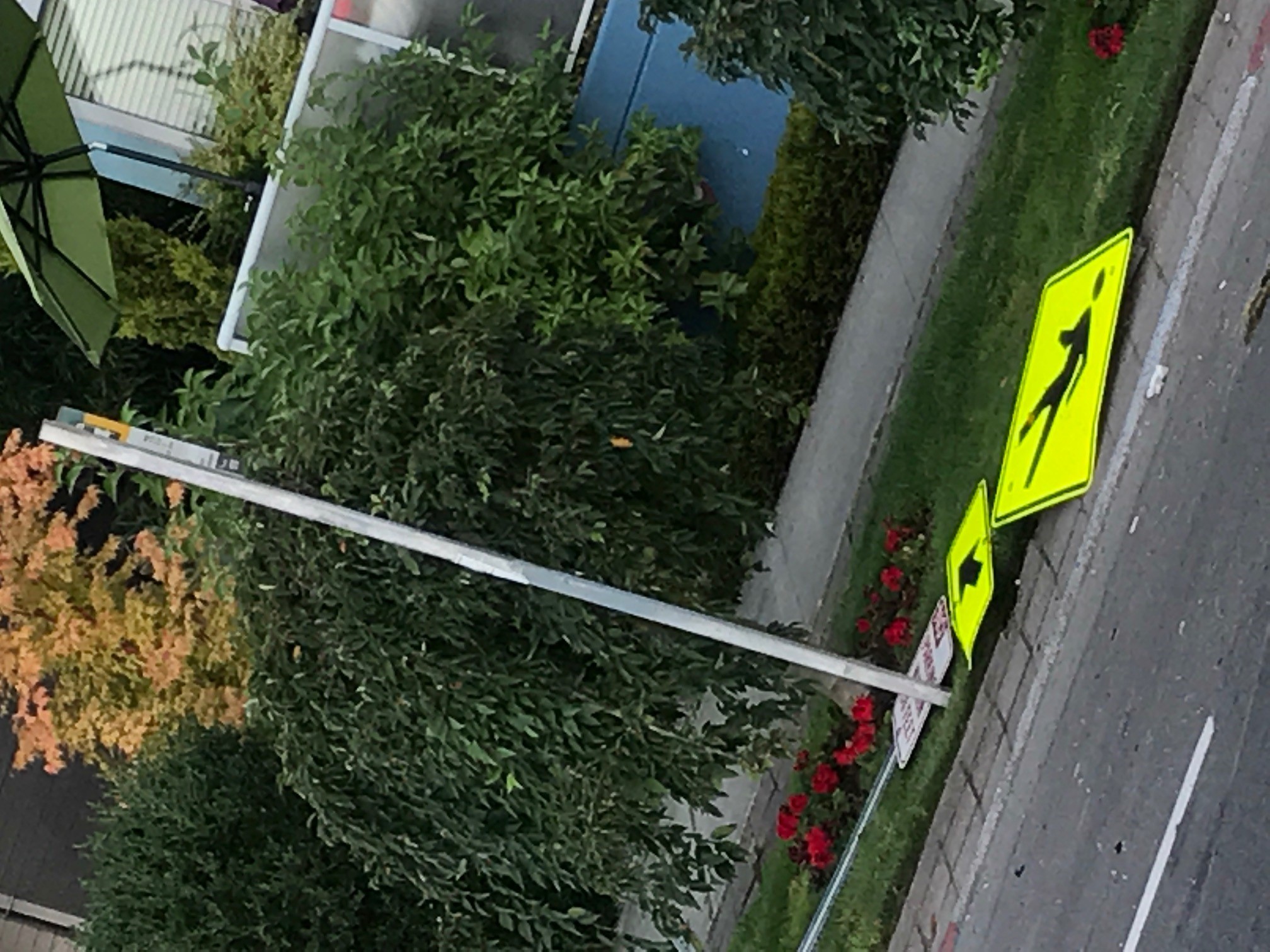 Meanwhile, rather than focusing on the carnage caused by inattentive and/or angry motor vehicle drivers, some people seem more concerned about this “obnoxious” “visual pollution.” 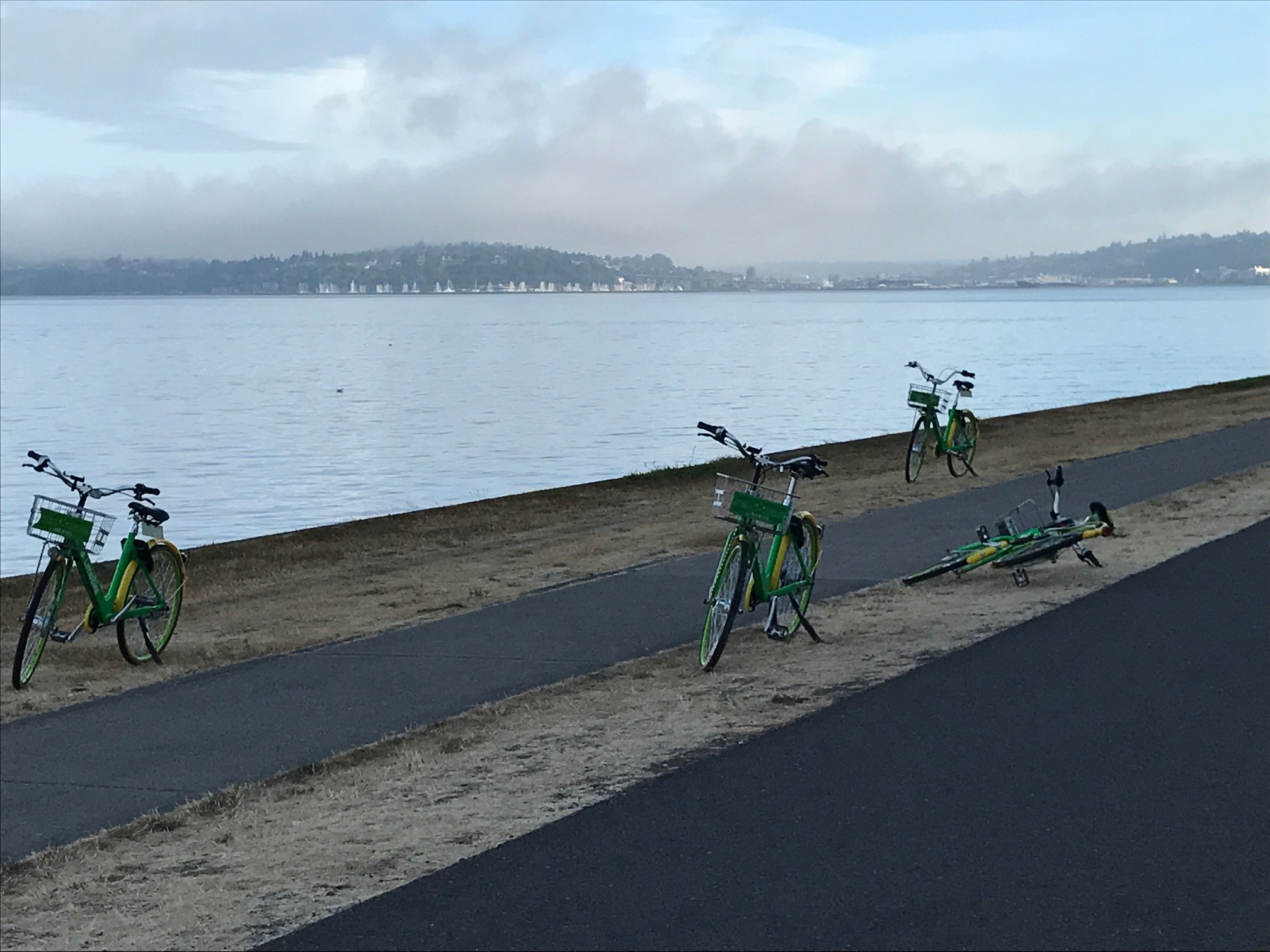 I think we should focus on driving, whether we are the drivers or we are just affected by them.  Cars kill. Tipped over bikes… not so much.

For instance, not much further along my commute, I came upon this car, rapidly backing down the bike path. 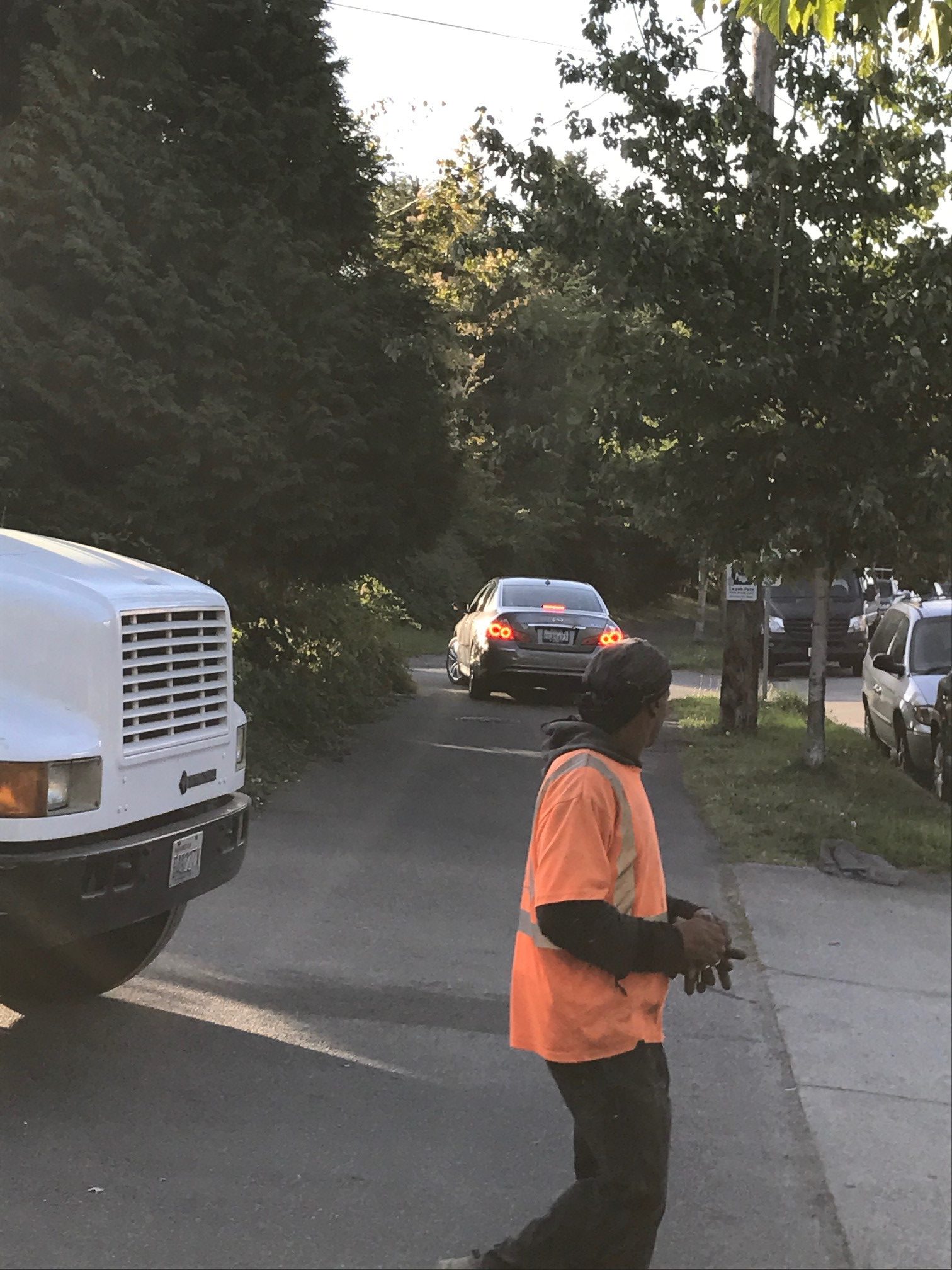 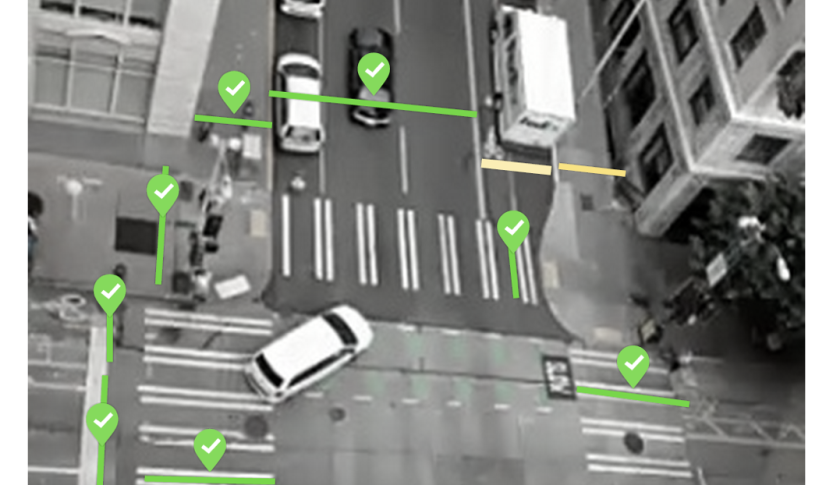 Washington Bike Law is helping a new company called Placemeter get accurate traffic counts that can not only specify bikes, people, cars, buses, but track their speeds and directions as well.  It can even count crashes and close-calls. 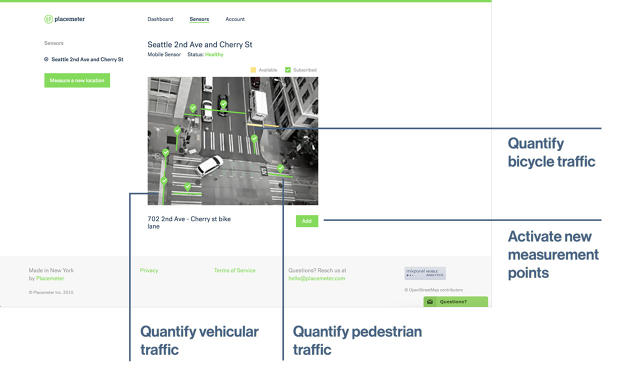 Today’s new technology post has a soundtrack… from 1982 (it sounds better than I remember and seems to be on-point here):

How is Washington Bike Law helping?  It’s not by coding I assure you!  Our office is merely a test location for one of the Placementer sensors… we’ve been monitoring the intersection of Second and Cherry for a few months now, including traffic on the Second Avenue Bike Lane. 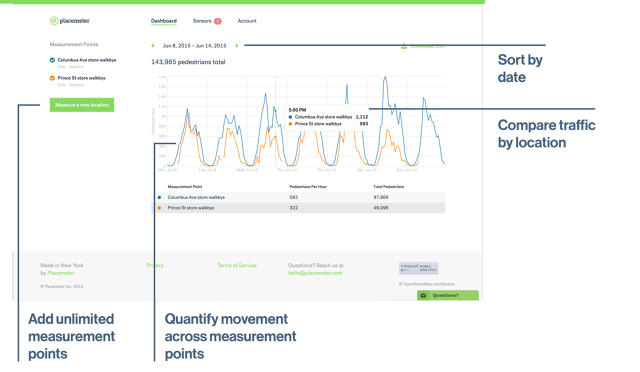 This new technology is starting to get press.  Fortune magazine and Fast Company just did stories on it and… 15 Minutes of Fame… our view over Second and Cherry is in both articles. 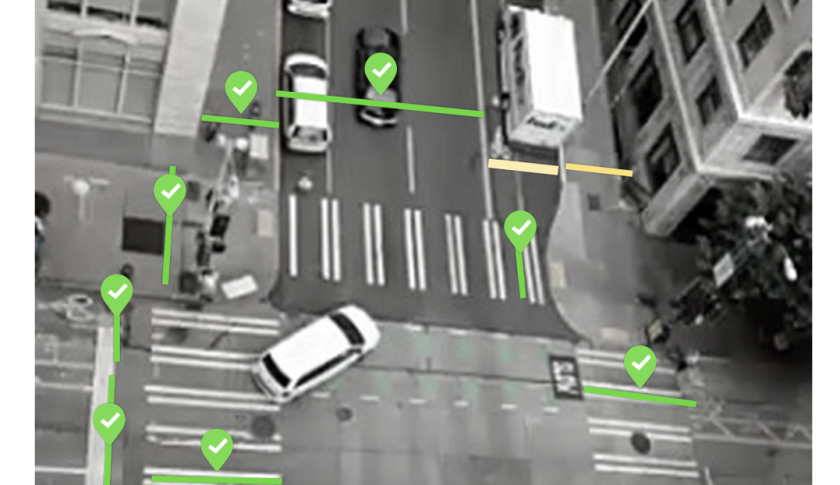 What about privacy?  Is the “eye in the sky” “The Man“?  Not really.  According to the Fast Company article, Placemeter “won’t use facial recognition to pinpoint individuals, nor will any people watch the video feeds. It is purposefully staying away from any security-related applications or customers … and couldn’t, say, help with a police search even if it wanted to.”

Who cares then?  We do.  Bike people.  Fast Company quotes Placemeter’s CEO Alex Winters as saying that bike activists interested in making the case for bike lanes could find it useful. “Typically, that kind of data has been out of reach for most community groups”.

Now how might more data be helpful in Seattle, land of process and little action?  Consider this recent PI headline:

The Yachties assert that the Westlake Cycletrack “will create unsafe conflicts between pedestrians, cyclists and commercial business traffic.”

Perhaps it’s naive to think that facts could help resolve conflicts, but I am hopeful.  And, hey, right now “I am the eye in the sky…”