Yesterday I wrote about signs blocking bike facilities.  They say the squeaky wheel gets the grease and changes were indeed made…  but, before we see that, here is the soundtrack for today.

I don’t want to take credit for these changes… no really.  I don’t.   There are now TWO signs blocking this area: 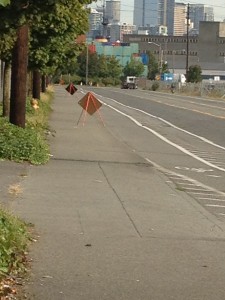 Besides saying BIKE LANE CLOSED, and thereby allowing motor vehicles to legally drive in it, what more information is so compelling that SDOT should block the sidewalk with another sign? 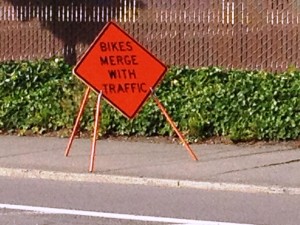 As if placing signs in our way of travel wasn’t enough of a reminder that bicyclists and pedestrians are second class to motorized vehicles, this sign distinguishes between bicycles and traffic.  Are we not traffic?  We are vehicles.

Although this is the law, many people do not view bicycles as vehicles and, instead, as impediments to traffic. A sign that says, ‘BICYCLES MERGE WITH TRAFFIC” only reinforces this misunderstanding.

I would like to see a sign that says, “MOTOR VEHICLES YIELD TO BICYCLES”, not to mention better laws to make roads safer for ALL traffic.

Anyway, I am less than thrilled about these signs.  Are they in anyway helpful?  Do we really think that, without that BIKE LANE CLOSED sign, cars would not enter a bike lane?  How about this bike lane limo, Which I saw just around the corner from these two signs: 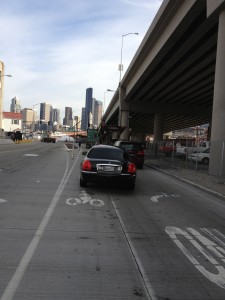 This was right after a truck and trailer were in the bike lane.  I talked to the driver (nicely) and he said he was about to make a U-Turn.  I doubt that that actually happened, but neither of these traffic members seemed worried about driving in a bike lane.

Until bicycles are thought of as legitimate vehicles and part of expected traffic, these problems will continue.  SDOT’s sidewalk signs don’t create these problems, but they sure don’t help solve them either…