… Bob Anderton, the founding attorney at Washington Bike Law, doesn’t see the added language as being clearly beneficial to a pedestrian trying to defend their presence in the roadway. Anderton notes that Washington’s pattern jury instructions, summaries of current laws provided by a presiding judge to a jury, already notes that a pedestrian has a standard of due care. “It is the duty of every person using a public street or highway [whether a pedestrian or a driver of a vehicle] to exercise ordinary care to avoid placing [himself or herself or] others in danger and to exercise ordinary care to avoid a collision,” WPI 70.01 states.

“I worry this adds complexity… if the goal is to make it safer for pedestrians, we should clarify the law and not add stuff nobody understands,” Anderton told me. He would modify the existing language, not simply add additional sentences onto it, to clarify what it means for a pedestrian to be exercising due care when using a roadway with or without a sidewalk. In the meantime, Anderton is concerned this change in law could be worse than the status quo. 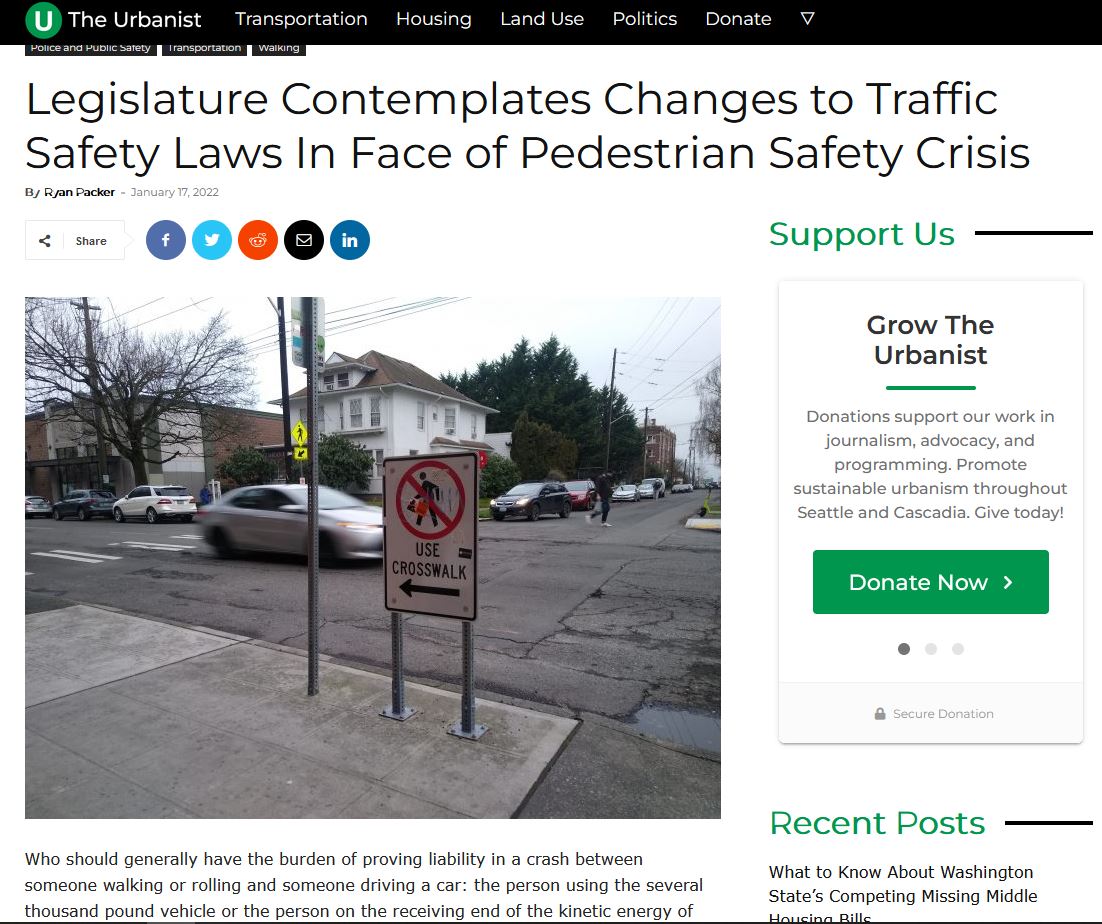 “Many studies have shown that adding highway capacity does not solve gridlock. It induces more demand and the gridlock quickly returns,” says lawyer Bob Anderton of Washington Bike Law, whose clients rely on active transportation. “Mode change is what we need, but that won’t happen when gas is cheap, parking is free and roads are dangerous for people outside of cars.”

There are plenty of variables involved with traffic deaths outside the realm of this report, like vehicle design, which Washington Bike Law’s Anderton points to as a leading cause of the increase in bike and pedestrian injuries. “Motor vehicles have gotten safer and safer for people inside of them [thanks to things like air bags and crumple zones], but they are more and more dangerous for people outside of them.” 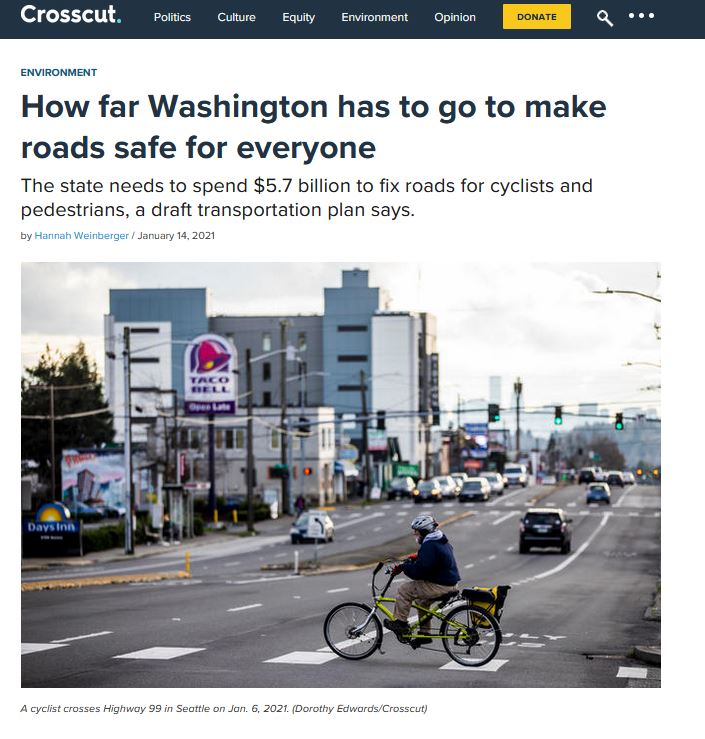 Vision Zero, the Law & You 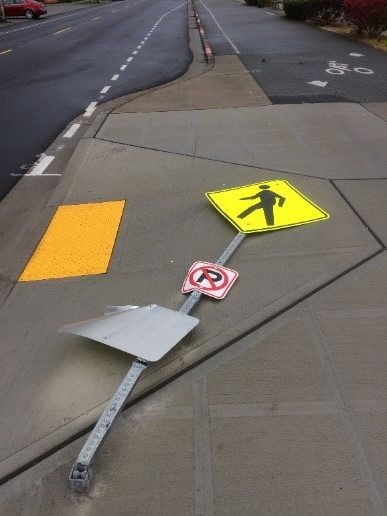 Washington Bike Law’s Bob Anderton published an article on Vision Zero in the January 2020 edition of the Bar Bulletin. Every lawyer in King County receives this monthly publication. Hopefully they will take it to heart.

In what was supposed to be a 5 minute segment, Bob managed just under 7 minutes, edging ever closer to the promised 15 minutes of fame.

If you have 7 minutes to spare, listen as he discusses #PresumedLiability and Washington Bike Law’s commitment to Bike Works and Seattle Neighborhood Greenways, among other topics. 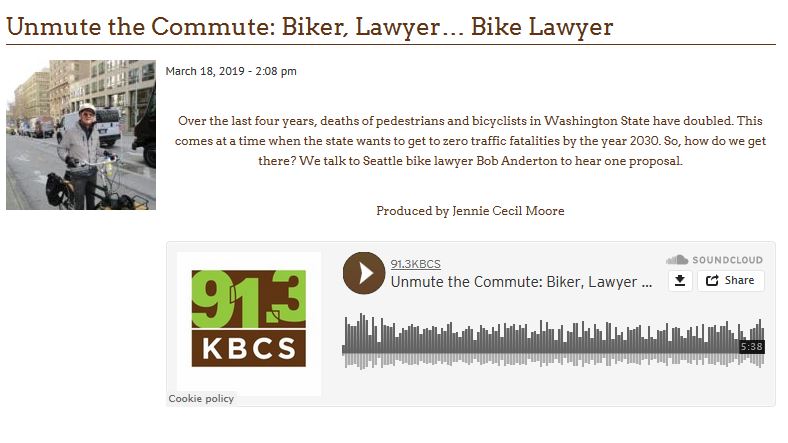 “We need space where everybody feels safe, and one of the ways to do that is to expand areas where bikes can be– that helps people walking, it helps people riding bikes, it also helps people in cars– because when people are out riding bikes (like some of our councilmembers) that means they’re not driving cars and so that’s more room on the streets for cars.

This is a win for everyone and I hope you’ll do it.”

Bob Anderton helped with a USDOT safety assessment of large vehicles with pedestrians and bicyclists in April of 2015.

“We need laws that motivate motor vehicle drivers to avoid these collisions in the first place,”

The full story is here. 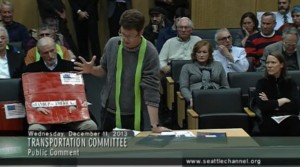 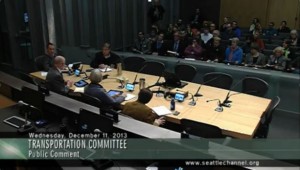 Full video is here.  Bob’s comments begin about 64 minutes in.

As reported in the Cascade Courier.

Bob speaks in favor of strict liability against drivers who hit bicyclists at the City of Seattle’s Road Safety Summit. [ October 24, 2011] 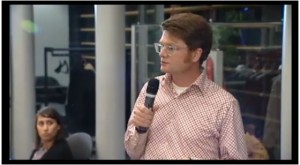 Bob is interviewed by Anne-Marije Rook, the Riding Reporter: “A long time bike-commuter himself, Anderton is Seattle’s premier bike lawyer who represents cyclists in and around the Seattle area.” [October 3, 2011]

[…] Representing bike messengers, commuters, recreational bikers as well as racers, Anderton has seen all sorts of incidents. Bikers get doored, backed into, broadsided, sideswept…you name it, he’s seen it. “In the cases you’ve handled, is it always the car’s fault?,” I asked. “Wouldn’t that be nice,” Anderton said. “I drafted legislation to always make it the car’s fault, which is what we call strict liability.” There are strict liability laws for things like dog bites. It is always the attacking dog’s fault unless the dog was provoked. In the case of bicyclists getting hit by cars, the strict liability would place the car driver at fault but defense arguments could be that it was dark and the bicyclist didn’t have any lights or the bicyclist got hit after running a red light, etc.

[…] “Many different people said that this was fatally flawed and that bicycle crashes were highly foreseeable and they did it anyway,” Anderton said. […]
carbusters.org

[…] “I’ve not heard of SPD impounding a bike because the rider wasn’t wearing a helmet, so no, I don’t think we would do that,” department spokesman Mark Jamieson said. […] The helmet law is buried in the County Board of Health Code […] Seattle attorney Bob Anderton also created a Web site about local bike laws.

[…] “Bob shows respect for everybody,” observed Oil. “He is always available to talk about cyclists’ rights at workshops we put on. Cyclists who are injured in accidents think that society and the government have this
attitude that they shouldn’t be on the road and so they don’t defend their rights. Bob speaks to this cycling community and lets them know they have legal rights. He respects us and it matters.” […]

Attorney Bob Anderton, who rides his bike to his downtown office every day, represents riders in personal-injury claims. He says while some officers pull cyclists over for legitimate reasons—helmets are required by law, and cyclists have to have front and back lights at night—there are plenty of cops out there who just don’t understand cycling.

“I talk to quite a lot of people who get in accidents, and the police come and [give cyclists] tickets for things they shouldn’t get tickets for,” Anderton says. For example, he says, cyclists have complained about getting tickets for “following too closely” when cut off by a car.

You can review the final letter and download a PDF of the final House and Senate letters at the following link:   http://www.saferoutespartnership.org.  As you meet with or contact Members of Congress, we encourage you to include this letter and this ask in your transportation discussions.

Listen to the entire show segment:

[…] last Friday bicyclists on a Critical Mass group ride through Capitol Hill clashed with a motorist who was blocked by their passage. The driver refused to wait. The crowd refused to back down. And the final picture was one of slashed tires, crumpled bikes and bloodied bodies. But the issue of blame was yet to be drawn. Then came the reporters. The media fallout left many wondering who had really done what, and to whom. Bicyclists felt unfairly maligned by the press. And the incident raised broader questions of who has the right to the road. What are the factors contributing to violent interactions between those in cars and those riding bicycles? Is there rising road rage between two pedaled and four wheeled road users and what role does the media play?

[…] There was a fracas Friday night on Capitol Hill between a driver and bicyclists in Critical Mass, a monthly protest ride. The bikers say the driver ran into several cyclists. The driver says he was just trying to escape a mob of bicyclists. Two bikers were arrested. No one has yet been charged. […] Should bicyclists be licensed, and ticketed like drivers? Should drivers be trained to share the road? What can be done to improve relations? […]

Anderton Law Office sponsors CRANK IT UP,
a Bikes, Art & Bands Event
We gave away 75 helmets and over 100 bike horns!

[…] South Park Arts is hosting a free community celebration Saturday called “Crank It Up,” starting with bicycle decorating and a bike tour around the neighborhood. Also featured: live music and arts and crafts available for sale and for on-the-spot creation. The event is being held at the brand-new Cesar Chavez Park […]

“[…] But has the South Lake Union Streetcar been successful? [… ] Are streetcars a good answer to our transportation woes? […] Guests: Ethan Malone streetcar program manager for the Department of Transportation, Don Clifton co/owner and CEO of S.L.U.T. Apparel, Jan Drago chair of the Transportation Committee on Seattle City Council, Bob Anderton represents 5 cyclists who have filed claim against the city after bicycle accidents involving the SLUT.”

“I don’t mind having fewer clients as long as people are safe,” said Anderton, the attorney who represented Schaefer. “Bicyclists don’t want to see just talk of a plan, or even a plan, we’d like to see action on making streets safe for all the legal users.”

And when a bicyclist sued Seattle, City Attorney Tom Carr — an elected official — rejected a settlement that would have inconvenienced the public utilities’ bureaucracy. As the Seattle P-I’s Casey McNerthney reports, Carr turned down a settlement with the injured cyclist, whose head injuries were severe enough to cause amnesia, because Carr thought SPU’s workload was too much to inventory the grates and plan their replacement in a year.[…]

New streetcar tracks on Seattle’s Westlake Avenue have turned into a trap for bicyclists[…] “Any time there’s a bicycle around, we’re extra cautious,” said Paul Warner, a streetcar operator for King County Metro Transit. Warner said he has seen a couple of cyclists fall during train testing and that he allows extra stopping distance behind bicycles in case one gets pitched […]

Bob is quoted in an AP article

Bob Anderton, a Seattle-based lawyer who bikes to work, said his business has climbed to 80 percent injured cyclists.

“It’s through the roof, it’s terrible,” he said. “People are just getting hit all the time.”

Bob is Profiled in