Washington Bike Law is working with other organizations and individuals to pass presumption of liability laws for drivers who collide with pedestrians or bicyclists.

Drivers of motor vehicles would be presumed responsible in the event of a collision with a pedestrian or bicyclist. This law would essentially make drivers’ insurance companies pay for any damages proven unless the driver/insurer proved that the person walking or riding was a cause of the crash.

Why do we need presumed liability legislation?

What’s the difference between strict liability and a presumption of liability?

Can we actually pass legislation creating a presumption of liability?    Yes, we can!

How can I help?

Bob Anderton (and many others) gave public testimony at a special Seattle City Council meeting on August 9, 2019, regarding at in support of Seattle’s Move All Seattle Sustainably (MASS) Transportation Package and three other pieces of safe streets legislation: 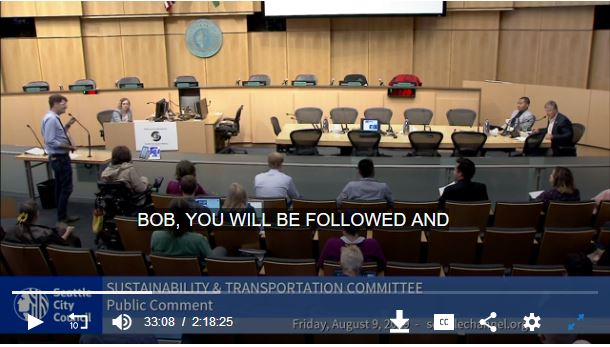 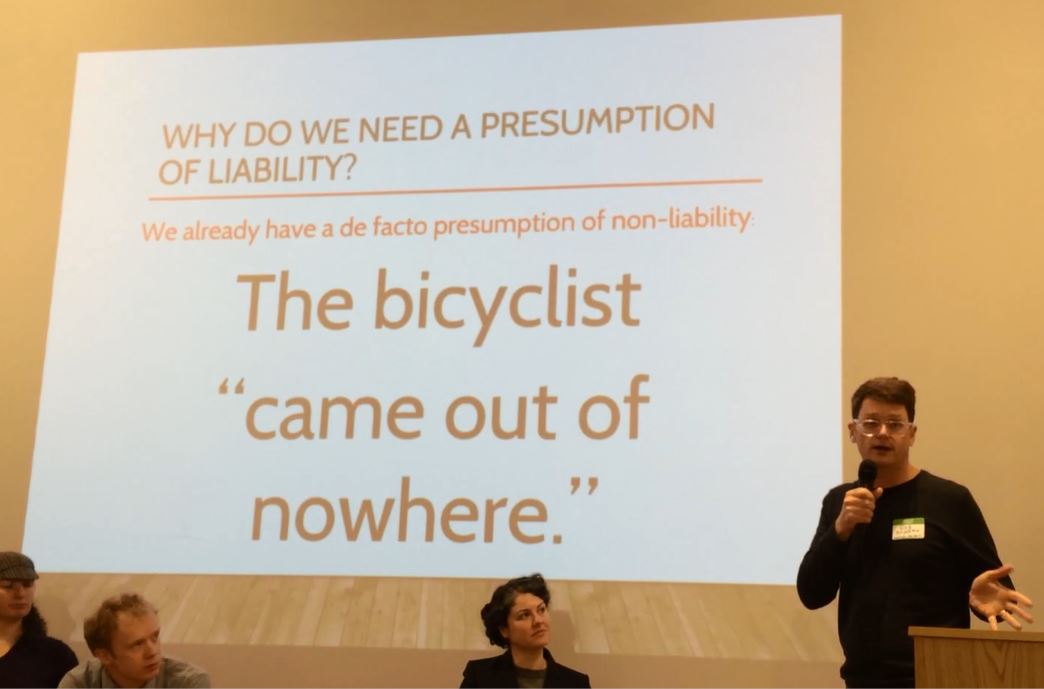 Seattle’s King 5 News did a story a few years back on presumption of liability for drivers who collide with pedestrians or bicyclists. 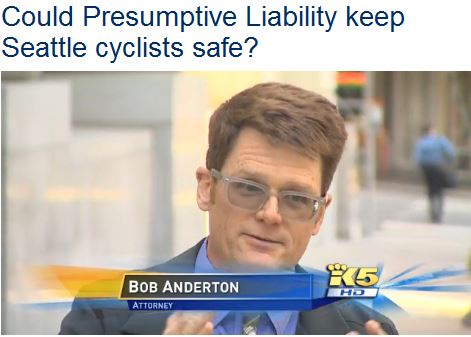 The Washington Defense Trial Lawyers, are apparently concerned about a presumption of liability law, according to a law firm with ties to the organization.

The firm says it “recently received a ‘What do you think?’ query from the Washington Defense Trial Lawyers and a link to a news article quoting Bob Anderton, a Seattle attorney and advocate for bicyclists.”

Note that the motto of the Washington Defense Trial Lawyers (or WDTL) is “Fighting for Justice and Balance in Civil Courts”… because too much justice can be a problem for the insurance companies WDTL lobbies for.

The firm WDTL contacted suggests, “Another possible option involving the legislature and potentially finding favor with the insurance lobby may be mandating PIP coverage at certain levels.”

The defense firm claims, “In a very over-simplified sense, driver awareness (or lack thereof) combined with bicyclist visibility (or lack thereof) are the real issues and these are not addressed by either party’s respective burden of proof.”

This over-simplified argument against a presumption of liability ignores the motivation to pay attention that would come with updating and clarifying our rules of the road to protect vulnerable pedestrians and bicyclists.

Washington Bike Law’s Bob Anderton has been advocating to make our streets safer for everyone for many years.  Unfortunately, our rules of the road still favor maximizing car speeds over safety.  Here is an article Bob wrote for the King County Bar Bulletin in 2009.

If you have ideas on how to make our streets safer for everyone, let us know.