Yesterday I commented on the counting of bicyclists in spite of the government shutdown.

Today, the government remains shut down, but bicyclists are not being counted.

Here is the theme song for today’s post, straight from Sesame Street.

This– the West Seattle Bike Counter– is not entirely shut down, but it certainly isn’t reliably working either.  I thought this was fixed for a while, but I’ve been noticing that it wasn’t counting some bikes, particularly carbon fiber bikes.  Recently I saw a road bike not get counted and, as the rider passed me, confirmed that her bike was steel.  Today, on my big fat Dutch Bike with many, many pounds of steel, I was not counted.

So I stopped and watched for a while, and saw that it is actually counting some bikes, like this guy:

I’m not sure what’s wrong, but it’s definitely under-counting.  Let’s get it fixed, please.  Let’s count bikes not sheep.

And, on a final note, in the other Washington, bikes are not just not being counted, they are being locked out.  Evidently bicycle travel is not essential.  Good luck with that gridlock… both in congress and on the streets. 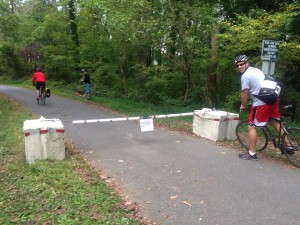