The tired rhetoric of a “war on cars” has yet to be retired.  Recently, an on-line commenter said this:

to this sad new item: 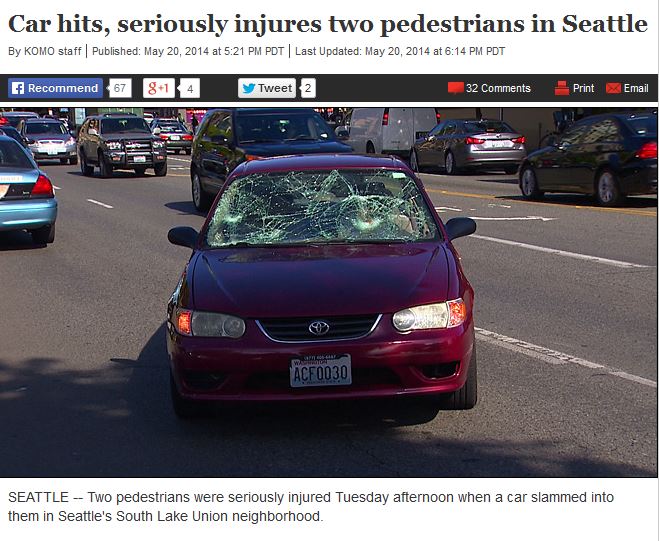 Instead of using inflammatory rhetoric or vehicles as weapons, people who drive and people who ride should both try to actually help each other out.

How do we do that?  It’s easy.  Here’s one example.  Often, when I am at a stop light on my bike, a car will pull up behind me wanting to make a right turn on red.  I move over to the left and frequently get a “thank you” or a thumbs up.  Once, however, I almost got hit by a car sprinting out in the left lane as the light turned green, so be careful being nice…

Yesterday, at a dangerous intersection for bicyclists underneath the West Seattle Bridge, I prevented a head-on collision between two cars.  The area looks like this: 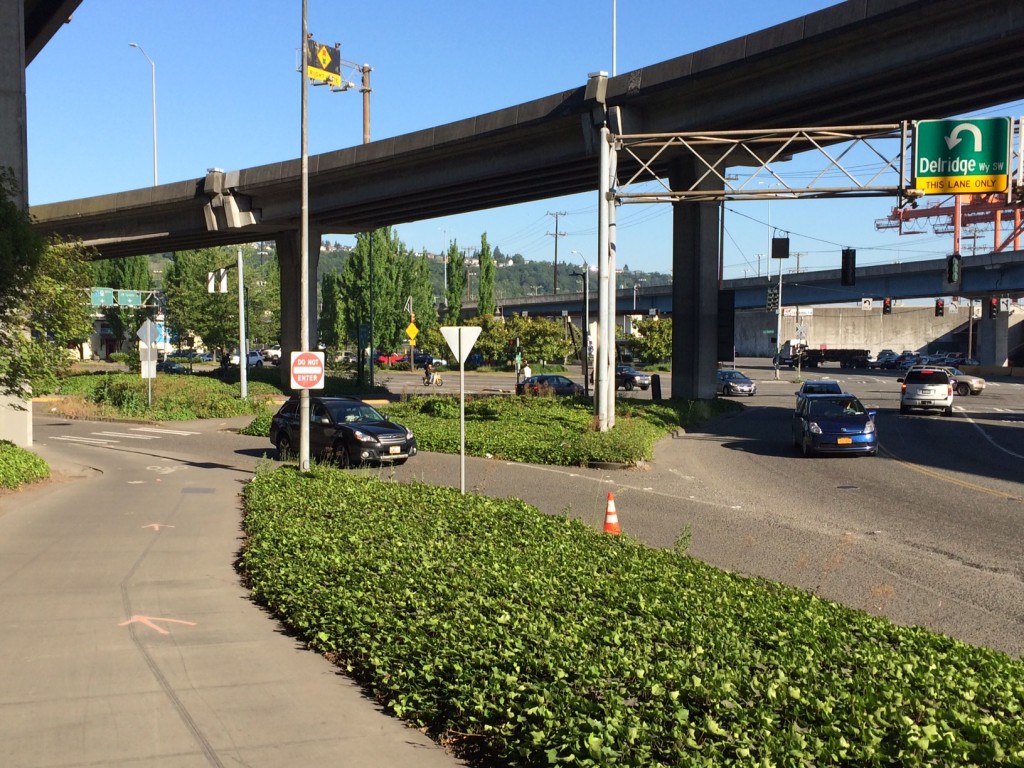 It’s frequently dicey for bicyclists in the crosswalk on the left, because cars come around the bend at a high speed and many drivers don’t expect a crosswalk or just don’t believe that they have a duty to yield to bicyclists in it.  I always slow down and stick my neck out to look left before crossing.

As I was doing this, I saw a rental car enter this one-way street from my right.  There is a sign that says do not enter: 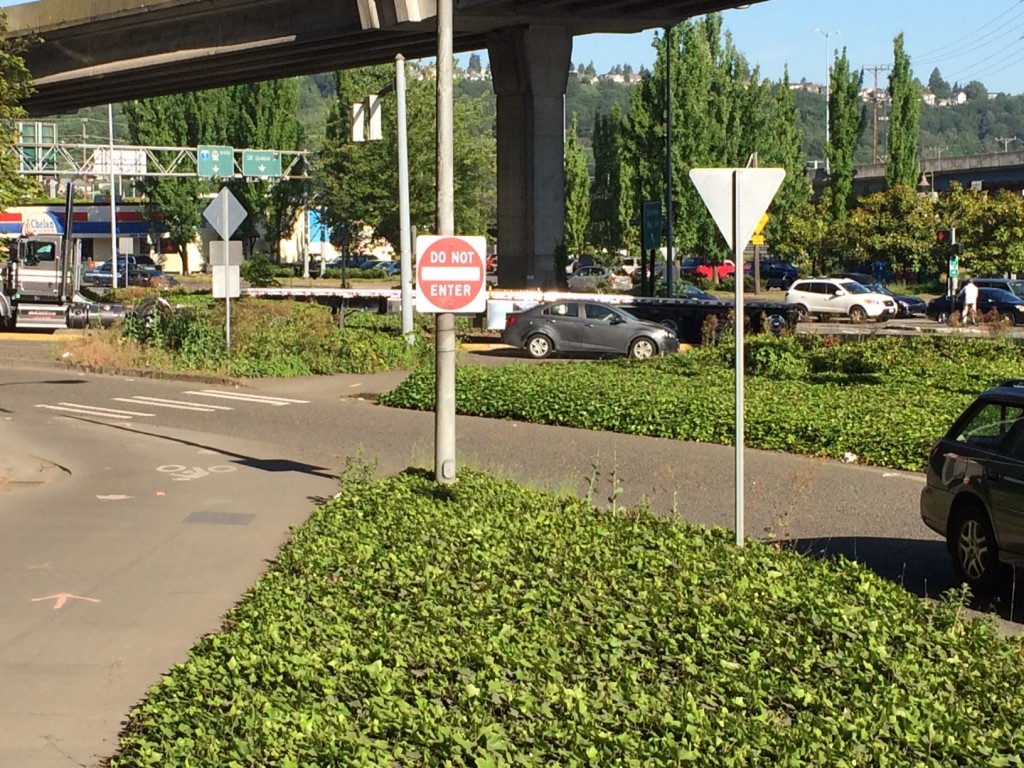 But there is also this, much larger, sign before it: 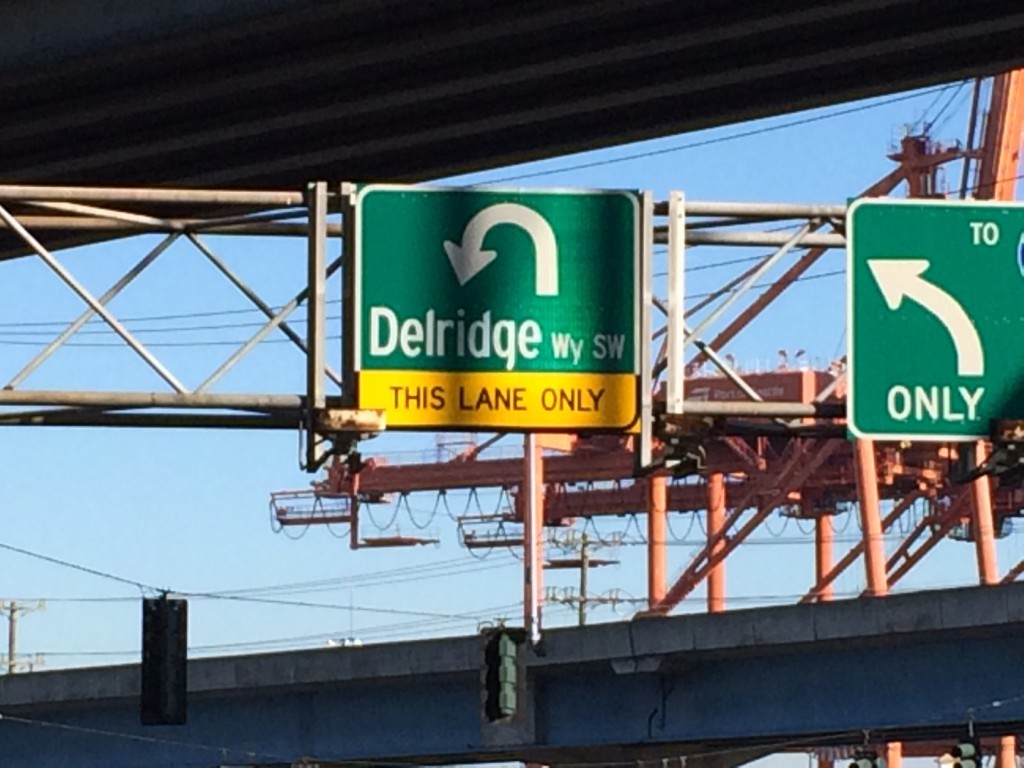 It can be confusing, especially for an out-of-towner.  “No No NO!” I yelled, “wrong way!”  The driver slowed, then stopped, and he began backing out just as another driver zipped around the corner.  One car on car (collateral damage in the War on Cars?) collision avoided, thanks to a bicyclist.

I know I’m not the only to help out people who happen to be driving rather than riding.  But fewer of us have made movies about it.

A few years ago, some friends and I made “Bike Man Versus the Fossil”, a two minute unedited Super-8 film.  It’s pretty awesome, if I do say so myself, and it’s got a great message:

Bike Man appears as a questionable superhero who battles the Fossil to save Car Girl who is, of course, late and stuck in traffic.