An area under the Ballard Bridge in Seattle, where the street curves and railroad tracks cross it diagonally, has been called the most dangerous street in Seattle. Literally hundreds of bicyclists have crashed there while attempting to cross the tracks.

For over three years, Anderton Law Office has been working bicyclists injured there, both to compensate them for their injuries and to make the area safer. The case recently settled following a verdict for the bicyclists and an appeal by the City.

The Burke-Gilman Trail has facilitated bike commuting and provided recreation in and around Seattle for over 30 years. However, an area in Ballard known as the “Missing Link” remains incomplete.

Although not on the official trail, many bicyclists continue on Shilshole Avenue through the
Missing Link. The dangerous crossings are in this area.

Normally, bicyclists who crash crossing railroad tracks do so because they are not paying attention or are inexperienced riders. Typically , this does not result in a personal injury claim because no one else is at fault. But the Missing Link crossing was not a normal crossing. Business owners near the tracks observed hundreds of bicyclists crash there. There were multiple problems with the crossing:

Soon after Anderton Law Office began working on the case, the City finally made improvements to the crossing. These improvements also followed on the heals of a King 5 TV story calling the area “the most dangerous street in Seattle.” 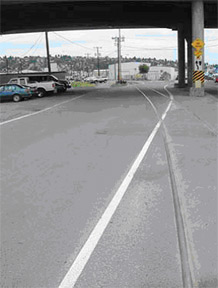 Signs warning of the crossing were installed, traffic was rerouted under the bridge, unused tracks were removed, and pavement markings showing a 90 degree crossing were added.

Normally, evidence of repairs made after an injury are not admissible in court to show negligence. However, there is an exception where a defendant denies that the repairs were feasible.

Here, the City did just that. Peter Lagerway, the City’s Pedestrian and Bicycle Coordinator and Senior Transportation Planner, not only denied that repairs were feasible, he denied that there was a problem.

An Investigator in Seattle’s Citizen Service Bureau closed a complaint on this issue in April 2001. Her e-mail said she “informed” the business owner who reported seeing over 100 crashes “that I was unable to do anything more. At that time, Pete Lagerway indicated that there is no short term resolution of the problem.”

The City made this determination even though Byron Cole, the railroad’s Operation Manager, suggested that it “paint pavement markings on and around the railroad crossing at issue.”

However, the video was taken after the plaintiffs had crashed and, more importantly, after the City had improved the crossing. Plaintiffs were able to use the video to show that making a safe crossing was indeed feasible.

One of the plaintiffs’ arguments for negligence on the part of the City was that the gap between the pavement and the tracks created a trap for bicycle tires. This gap was especially dangerous because the tracks crossed the street diagonally.

Peter Lagerway helped write several government guidelines that consistently recommended using flangeway fillers for this type of crossing. Yet, he and the other hired defense experts insisted that these do not work. But the publications they helped write years earlier said otherwise: “flangeway filler can eliminate dangerous nonright angle crossings by filling the gap between the inside railbed and the rail…”

Mr. Lagerway’s testimony was also called into question by the City’s recent plan for this very crossing. The Seattle Department of Transportation’s Ballard Design Study stated: An area of concern that has experienced a high number of bicycle accidents (prior to changes made in 2002) is under the Ballard Bridge, where the railroad crosses NW 45th Street. The proposed trail crosses the railroad tracks at 15th Ave NW and Shilshole Ave N. The flangeway gap (the gap next to the rail) can cause bicyclists to fall. Striping modifications have already decreased significantly the number of accidents occurring. The addition of a dedicated trail crossing at a more abrupt angle combined with a rubberized crossing material that fills the flangeway gap, will mitigate this important safety issue. (emphasis added).

The plaintiffs in this case determined that, by not giving up after the railroad and the City denied their claims, they would ultimately make the Missing Link safer for other bicyclists.

The area is now safer. Hopefully it will not take another lawsuit before the City finally completes the Missing Link.