Millie’s humans are Jessica and her husband Niels.

Favorite ride: I once got to ride over 100km on Niels’ back in the Outer Banks in North Carolina! I love the beach and being warm so this was my favorite ride!

Favorite treat:  Despite living with two humans who eat a plant-based diet, my favorite treat is dried sweet potato wrapped in chicken jerky.

Pet (ha!) peeve: I hate seeing any of my favorite humans leave on a bike ride without me.  I get so upset that I bark, grumble, and try to chase them down the street.

Favorite thing about your human being a bike lawyer: Since I love going on bike rides either on my human’s back or while being towed in a trailer, I love that my human works somewhere where she is encouraged and even expected to ride her bike to work every day.

Vision Zero is an international strategy to eliminate traffic fatalities and severe injuries while increasing safe, healthy, and equitable mobility for everyone.

Washington Bike Law recently settled a case against the City of Kent involving a dangerous crosswalk, so we can now share with you some things we learned litigating it.

Vision Zero is an ethical framework stemming from the premise that it is unacceptable for people to suffer serious injuries or death as a result of traffic violence. Before Vision Zero, serious injuries and loss of life were merely factors to be considered in the cost-benefit analysis of transportation engineers.

Vision Zero was first approved by the Swedish Parliament in 1997. Seattle produced its first Vision Zero plan in 2015. The state of Washington has been producing its Target Zero Highway Safety Plans since 2000. Washington and Seattle’s plans both call for zero deaths or serious injuries on our roads by 2030.

What about Kent? Here is an excerpt from a deposition of its Transportation Engineering Manager and officially designated speaking agent:

We also took the deposition of Kent’s Police Research and Development Analyst, who was designated as the City’s speaking agent on Vision Zero. She talked about “shared responsibly” and questioned whether drivers even had a duty to stop for pedestrians at intersections. We followed up with her:

We have previously written about how Kent’s streets are dangerous for pedestrians, and these depositions show what the people at the top are thinking (or not thinking).

In another deposition, we asked Kent’s Transportation Engineering Manager:

The intersection in our case involved a marked crosswalk for the Interurban Trail that crosses Willis Street at 74th Ave W. People wanting to use the crosswalk always approach a red light because it defaults to red. They must use what is sometimes called a “beg button” to get a green light.

Meanwhile, drivers approaching the same “T” intersection from 74th Ave have two lanes: one that can only turn left; and one that can only turn right. Drivers in the left-turn lane can only drive through the marked crosswalk. The signals for all the car lanes turn green simultaneously, regardless of whether someone has pressed the beg button to cross the road safely.

This intersection is shown from above on Google Maps:

We asked Kent’s Transportation Engineering Manager how its design compared to the design of demolition derby tracks:

Kent claimed that its design was safe because drivers should know that they have a duty to stop at crosswalks—even though its own speaking agent wasn’t sure what constitutes a crosswalk.

According to the Vision Zero Network, the “Vision Zero approach recognizes that people will sometimes make mistakes, so the road system and related policies should be designed to ensure those inevitable mistakes do not result in severe injuries or fatalities.”

This means that streets need to be designed to be safe even without perfect human behavior. While road users are required to follow the rules of the road, if users regularly fail to comply (for instance, not stopping for people in crosswalks) then system designers—traffic engineers and lawmakers—need to change the system to make it safer.

This ethical platform loop is illustrated below:

We asked Kent’s Transportation Engineering Manager about this:

Vision Zero means that governments must take into account not just what they think users should do on their streets, but also what they actually do, like not stopping for people in crosswalks.

Vision Zero policies will make our streets safer and better, but there is a learning curve. Road designers, politicians, and the public all need to understand that crashes resulting in serious injuries and deaths on our roads are not accidents.

They are preventable, but we all need to be part of their prevention. At Washington Bike Law, we’d very much prefer for people to not be seriously injured and killed on our streets. But when they are, we work to hold people—and road designers—responsible.

While the City of Kent’s insurance ultimately paid to compensate our client, Kent has yet to make that crosswalk safe. We attempted to negotiate safety improvements, but the City refused. We hope than it will improve it before someone else is seriously injured or killed. Unfortunately, we cannot force our leaders to do the right thing—but litigation and significant verdicts can help make our streets safer.

We still have much work to do, particularly with people who don’t follow this issue. Someone in our community recently wrote in the Seattle Times:

Not accepting that crashes are just accidents is an easy way you can help achieve Vision Zero. There’s even a hashtag, #CrashNotAccident, but please don’t use it while driving.

In announcing the awards, Bob Anderton said, ” I am a bike lawyer. I’ve been representing people injured on our streets for more than a quarter century. I founded Washington Bike Law not just to represent injured bicyclists, but to help make our streets safer for everyone.”

Anderton continued, “But here’s the deal, my office represents people who’ve already been injured in bike and pedestrian crashes. Mostly what we do is too late.”

“Tonight, with these first-annual awards, we recognize Seattle people and organizations who work to prevent crashes and make Seattle’s streets better for people.”

The annual Washington Bike Law and SNG awards are:

The People’s Champion Award, for outstanding safe streets advocacy and achievement; and

The Community Enhancer Award, for leadership in creating vibrant public space and making streets places where communities can thrive.

Friends of Hing Hay Park is the 2019 winner of the Community Enhancer Award for bringing to life perhaps Seattle’s best new public space at… (wait for it) Hing Hay Park.

Jeff Hou spoke about how the park really serves the community and is actually used by it. 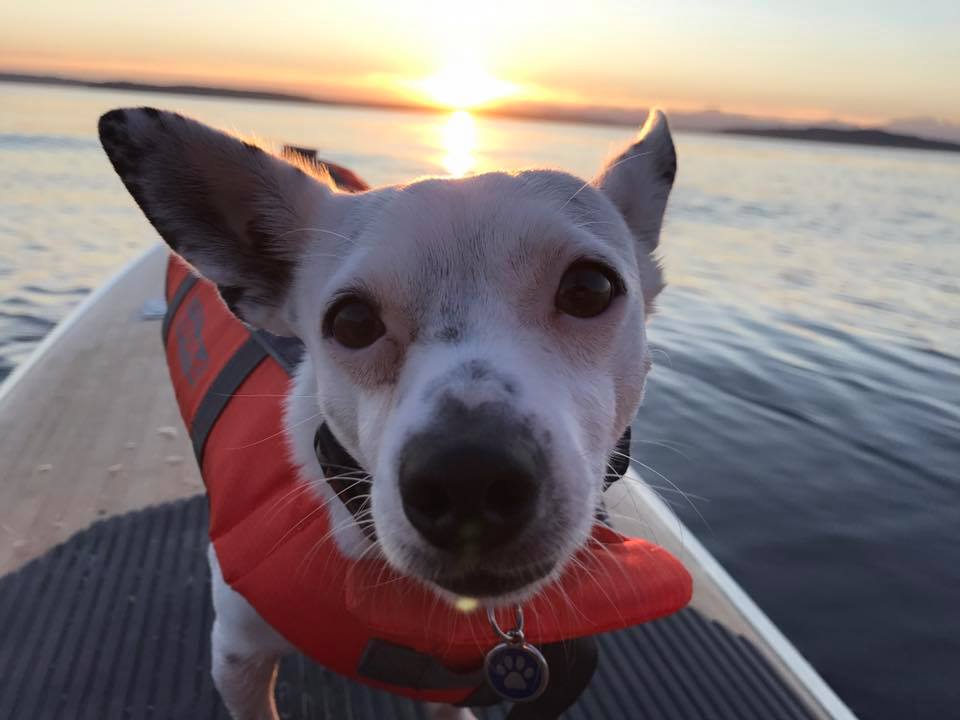 Moses is Bob’s dog. He and his wife adopted him from the Seattle Humane Society about 3 years ago which makes him about 5 years old. Moses regularly rides to work in a luxurious and relatively safe basket on the front of Bob’s bike.

Favorite ride: Bikes are fine, but paddle boarding is my favorite
Favorite treat: Whatever you’re having
Pet (ha!) peeve: Birds
Favorite thing about your human being a bike lawyer: Riding in a covered basket with a plush blanket.

A Presumed Liability law would help ensure that drivers who injure people walking, biking, or using wheelchairs are held accountable. Better still, it would help prevent these collisions.

Morgan Scherer was injured when a driver failed to stop for her as she rode a bicycle through a marked crosswalk. Although state law is fairly clear on this duty, the police ticketed Morgan and the driver’s insurer refused to admit liability.

Morgan’s case went to trial, but a King County jury found that the driver used ordinary care in failing to stop and was therefore not negligent. A presumed liability law could have helped, particularly if it had motivated the driver to stop.

Morgan suffered a traumatic brain injury in this crash. Here, we are republishing, with Morgan’s permission, a remarkably gracious and accepting glimpse into how much this collision continues to affect her.

I biked to Golden Gardens today to try out a kayak. It turns out the owner of the kayak is someone I knew from 25 years ago when I was racing. Apparently, I knew him rather well. He reminded me that we drove the kayak club’s racing boats from Seattle to Sacramento together when I was 18 or 19. He taught me how to drive with a trailer. He vividly recalled that I consistently refused to start the car until he put his seatbelt on, which was annoying since I was a kid telling him what to do.

I can totally see myself doing that, and am delighted with my chutzpah. I also remember his advice about backing up with a trailer, “Just try not to have to back up”, though I don’t remember he was the one that gave it. In fact, I have literally no memory of the trip. I don’t remember driving down together, though he assures me we had fun and listened to a lot of great music, which seems plausible. I don’t even remember that the trip happened at all.

Even stranger, I don’t remember driving the trailer home again from California. He flew home, and I apparently drove home alone, so I can’t say whether I had fun. I still love driving trips to California though, so it was probably fine.

It all sounded like me, and seemed plausible given what I remember of what I was doing and involved with at that time. But his stories sparked no reflection in me, except for the one vague and disconnected recollection…

It’s quite startling. Either he is remembering the wrong person, or I have completely lost some big memories. I think the latter is true, because this is not the first time this has come up. After my brain injury we drove through the redwoods on Hwy 101 in California. I know for sure I’ve been there many times in the past, but everything was unreasonably and eerily unfamiliar.

I have been assured by doctors that my brain injury and subsequent epilepsy probably has not damaged my long-term memory storage. However, there have been several times when, after a seizure, I have been unable to recall a childhood memory that I had recounted to Sofia in the week prior to the seizure.

Once the memories are gone, they seem totally gone. Listening to his stories, I could imagine the trip. It all sounded like me, and seemed plausible given what I remember of what I was doing and involved with at that time. But his stories sparked no reflection in me, except for the one vague and disconnected recollection about backing the trailer.

I feel….grateful, mostly. Certainly it is surreal. When I look back, my life seems full of blank spots. I am grateful when someone fills me in on the stories of my life. Grateful that I have been friends with many people who remember fun and astonishing things we have done together. Now, though I don’t remember the events my friend remembers, I do remember kayaking in the sun today, hearing his stories of the events. What a gift.