Bob is back from Copenhagen and other European places where bicycling is much safer than Seattle.  In my absence SDOT started a safety campaign that involves small election-style signs like this: 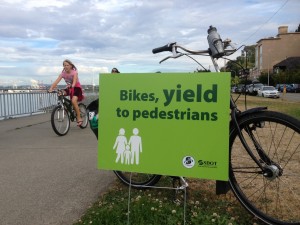 I agree that bicyclists should yield to pedestrians… and even if I didn’t, it’s the law.  But it should also be the law that motor vehicle should yield to bicyclists.  Why this is unfathomable in the United States, I don’t know… and I’ve been trying for years to shake some of that unfathomability off.

Bicyclists are faster than pedestrians and, if there is a collision, the pedestrian is more likely to be hurt.  So bikes yielding makes sense.  But that’s nothing like the situation between bicycles and motor vehicles is it?  Is it?

Part of my recent trip involved touring Iceland.  It is a beautiful place with incredible landscapes.  And yet, similar to our Alaska, my impression was that not too many people identify as environmentalists.  Restaurants frequently offer whale and puffin and, while those dishes may be tourist-oriented (not me!), many people seemed to like reindeer pizza.  Nevertheless, in spite of an apparent love for monster trucks and limited infrastructure, the law in Iceland is clear that, if a motor vehicle hits a bicyclist, the driver is at fault.

Thanks to Copenhagenize’s  Mikael Colville-Andersen, I was able to meet with a couple of really nice representatives of the Icelandic Cyclists Federation, Árni Davíðsson and Morten Lange: 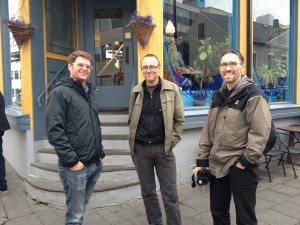 Árni said that the last bicyclist killed in Iceland was in 1997 and that all of Iceland’s bicycling  fatalities have been in urban areas, not on the often scary narrow rural roads.  He thought that the 30 KM speed limit in residential areas that they’ve had for the past 15 years may have helped.  30 KM is less than 20 mph.  Slower speeds certainly save lives.  Seattle’s Mayor McGinn is right about that.

Although Iceland has strict liability for drivers involved in collisions with bicyclists, drivers can defend with evidence of extreme recklessness on the part of the bicyclist, but neither Árni nor Morten were aware of any examples where a bicyclist had actually been found to have contributed to a crash.  In Iceland, unlike Washington, it is illegal to ride a bike under the influence of alcohol, but the standard in Iceland for bike riding is the same as horse riding– basic ability to control the bike.  For motor vehicles there it’s .o5% blood alcohol, whereas we have a .08% limit here.

Iceland, unlike Copenhagen, was not a place I thought that I would bring back bicycling inspiration, and yet in many areas, Iceland is ahead of us.

If we want to make bicycling safer in Seattle, we should change our laws to start with a presumption that, when motorists are involved in collisions with bicycles, the motorist is at fault.