I went to SDOT’s Bicycle Master Plan Open House yesterday after work.  It had some competition, with the sunny evening making it lovely for actual bike riding… but I went, thinking that this was the right thing to do, and knowing that it would still be sunny to ride home afterwards.

When I arrived at City Hall, there were multiple bike racks set up on the rain plaza area by the red doors.  I locked my bike and confirmed that there is still no way to enter through the translucent red doors.  I went to the main lower entrance and found those doors locked.  I then trudged up the stone stairs/waterfall to these doors: 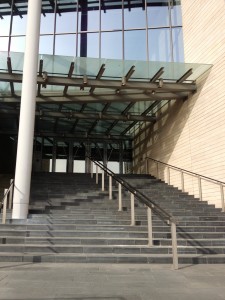 They were also locked.  So I walked halfway down and noticed other bicyclists starting to head up the stairs and a few people walking north to another set of doors.  I yelled some greetings to our fellow bike people and advised them not to bother with the main entrance, but to follow the people walking to the north middle area doors.

Unfortunately, those too turned out to be locked.  So a small group of us walked around the block, past the permanent bike racks with a sign saying that there was more bike parking below (good luck getting in) and found a single open door to City Hall: 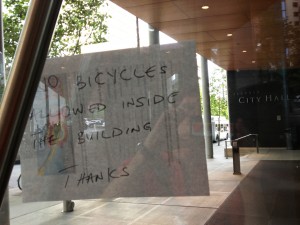 The sign on it said, “NO BICYCLES ALLOWED INSIDE THE BUILDING   THANKS”.

After talking to multiple people about the locked doors including a security guard who said that he planned to open the west doors if there was a crowd in front of them, and several SDOT people who didn’t seem to be concerned, I recognized SDOT’s Kevin O’Neill from prior meetings and told him.  He promptly left the hall and presumably got the doors opened for others.  Thank you Kevin.

The meeting was fine, the plan sounds great… it’s just that I am not overly confident that Seattle has it in it to actually DO what it PLANS.

The locked doors are one illustration of this problem.  SDOT even acknowledges that “a consistent approach and partnership are necessary to implement bicycle programs efficiently.” 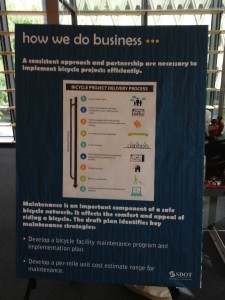 But when SDOT uses staff and consultant time to do outreach and spends money advertising to bring people to City Hall when the doors are locked, that can’t be efficient.

Another example of Seattle bicycle schizophrenia is our Police Department’s failure to provide adequate training on the rules of the road for bicycles.  We can’t expect police to do their jobs when they don’t know what their jobs are.  Washington Bike Law has represented numerous bicyclists who have been given tickets for being cut off in bike lanes, hit while riding in crosswalks, or for having the audacity to get doored.

Talk about adding insult to injury… “a consistent approach and partnership are necessary to implement bicycle programs efficiently.”