Riding to work this morning I crossed the site of bicyclist Lance David’s death. I still don’t know why this tragedy happened, but I do have a few observations on what will– and will not– make things safer for those of us still riding.

First, actions speak louder than words.  Today, a motorist stuck his head out the window of his Lexis and yelled at me, “that’s how people get killed, a**hole!”  Even if he was correct that my riding was dangerous (I felt that I was riding to avoid him since he had already yelled at me earlier), his method of suggestion was unlikely to things safer for either of us.  Everyone (me included) should drive and ride with increased awareness of others.  If other people seem like idiots, let’s give them more space instead of screaming at them and taking our attention off the road.

Second, people say a picture is worth a thousand words.  City traffic engineer Dongho Chang, says “It’s clearly not a dangerous intersection”.  And yet, those of us who ride it know that there are things along that route that would take quite a few words to explain.  Like this: 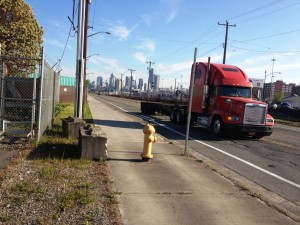 I remember when this stretch of sidewalk was rebuilt.  I thought, “finally, the fire hydrant will be moved.”  Nope.  And why not narrow the passage around it further with cement blocks and a sign post with no sign…

It’s true that there is a bike lane on the other side of the street.  In fact, Mr. Chang has said that safety improvements for the area “could be as simple as restriping”.  But new paint won’t change the fact that bicyclists will still need to cross East Marginal Way to get to the existing bike lane and getting there can be tough.  Adding a marked crosswalk might help, but many drivers seem oblivious to the duty to yield to bicyclists in crosswalks.

In fact, also this morning, right in front of my office, a pickup truck driver made a right turn on red (without fully stopping) and drove through the crosswalk where I was riding (and six pedestrians were walking).  Educating everyone on the rules of the road (police officers too) may go a long way towards improving safety.