Vision Zero is an international strategy to eliminate traffic fatalities and severe injuries while increasing safe, healthy, and equitable mobility for everyone.

Washington Bike Law recently settled a case against the City of Kent involving a dangerous crosswalk, so we can now share with you some things we learned litigating it.

Vision Zero is an ethical framework stemming from the premise that it is unacceptable for people to suffer serious injuries or death as a result of traffic violence. Before Vision Zero, serious injuries and loss of life were merely factors to be considered in the cost-benefit analysis of transportation engineers.

Vision Zero was first approved by the Swedish Parliament in 1997. Seattle produced its first Vision Zero plan in 2015. The state of Washington has been producing its Target Zero Highway Safety Plans since 2000. Washington and Seattle’s plans both call for zero deaths or serious injuries on our roads by 2030.

What about Kent? Here is an excerpt from a deposition of its Transportation Engineering Manager and officially designated speaking agent:

We also took the deposition of Kent’s Police Research and Development Analyst, who was designated as the City’s speaking agent on Vision Zero. She talked about “shared responsibly” and questioned whether drivers even had a duty to stop for pedestrians at intersections. We followed up with her:

We have previously written about how Kent’s streets are dangerous for pedestrians, and these depositions show what the people at the top are thinking (or not thinking).

In another deposition, we asked Kent’s Transportation Engineering Manager:

The intersection in our case involved a marked crosswalk for the Interurban Trail that crosses Willis Street at 74th Ave W. People wanting to use the crosswalk always approach a red light because it defaults to red. They must use what is sometimes called a “beg button” to get a green light.

Meanwhile, drivers approaching the same “T” intersection from 74th Ave have two lanes: one that can only turn left; and one that can only turn right. Drivers in the left-turn lane can only drive through the marked crosswalk. The signals for all the car lanes turn green simultaneously, regardless of whether someone has pressed the beg button to cross the road safely.

This intersection is shown from above on Google Maps:

We asked Kent’s Transportation Engineering Manager how its design compared to the design of demolition derby tracks:

Kent claimed that its design was safe because drivers should know that they have a duty to stop at crosswalks—even though its own speaking agent wasn’t sure what constitutes a crosswalk.

According to the Vision Zero Network, the “Vision Zero approach recognizes that people will sometimes make mistakes, so the road system and related policies should be designed to ensure those inevitable mistakes do not result in severe injuries or fatalities.”

This means that streets need to be designed to be safe even without perfect human behavior. While road users are required to follow the rules of the road, if users regularly fail to comply (for instance, not stopping for people in crosswalks) then system designers—traffic engineers and lawmakers—need to change the system to make it safer.

This ethical platform loop is illustrated below:

We asked Kent’s Transportation Engineering Manager about this:

Vision Zero means that governments must take into account not just what they think users should do on their streets, but also what they actually do, like not stopping for people in crosswalks.

Vision Zero policies will make our streets safer and better, but there is a learning curve. Road designers, politicians, and the public all need to understand that crashes resulting in serious injuries and deaths on our roads are not accidents.

They are preventable, but we all need to be part of their prevention. At Washington Bike Law, we’d very much prefer for people to not be seriously injured and killed on our streets. But when they are, we work to hold people—and road designers—responsible.

While the City of Kent’s insurance ultimately paid to compensate our client, Kent has yet to make that crosswalk safe. We attempted to negotiate safety improvements, but the City refused. We hope than it will improve it before someone else is seriously injured or killed. Unfortunately, we cannot force our leaders to do the right thing—but litigation and significant verdicts can help make our streets safer.

We still have much work to do, particularly with people who don’t follow this issue. Someone in our community recently wrote in the Seattle Times:

Not accepting that crashes are just accidents is an easy way you can help achieve Vision Zero. There’s even a hashtag, #CrashNotAccident, but please don’t use it while driving.

Washington Bike Law believes in #VisionZero. Many people haven’t heard of Vision Zero, which is fine if they don’t have anything to do with transportation or law enforcement, but outrageous if they do.
The following is a search on Kent’s website for Vision Zero plan: 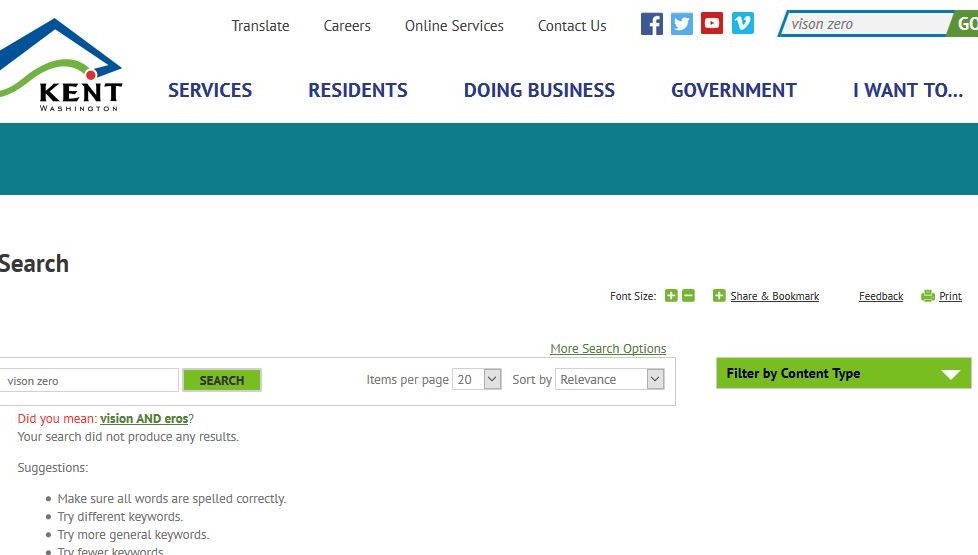 The website’s search asks, “did you mean vision AND eros?”  Well sure, we’d LOVE for Kent to have shown a vision for safe streets, but alas, nothing is to be found… #ZeroVision.
We  represent a client who was seriously injured in Kent, Washington when he was stuck in a marked crosswalk. He is suing Kent for having Zero Vision– meaning in that case, not just that Kent failed to adopt Vision Zero, but that it failed to meet the bare legal minimum of having streets reasonably safe for ordinary travel.
Our client was riding to work on the Interurban Trail, but had to cross Willis Street along the way.
Unfortunately for our client (and others who use crosswalks there) the City of Kent was not thinking about Vision Zero when it designed the crosswalk where our client was struck and– apparently– others in the city.
The city intentionally designed traffic lights to default to red for anyone using the Interurban Trail. Our client stopped and pressed what is sometimes called a Beg Button to get a green light to cross the street. Only after he had a green light did he enter the street.
Traffic on 74th Avenue South, which is more or less parallel to the Interurban Trail, also had a red light. The driver who struck our client stopped for that red light and was in a right-turn-only lane with a separate signal. Drivers on 74th Avenue get a green light AT THE SAME TIME AS THE GREEN LIGHT FOR THE CROSSWALK. 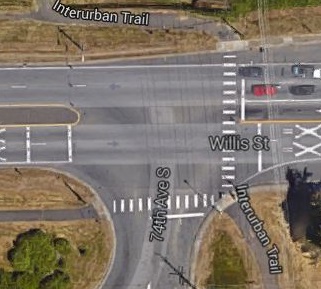 This is a “T” intersection. Traffic from this conflicting light could ONLY turn through the crosswalk with the conflicting signal. While this is obviously dangerous, the City of Kent claimed that it was fine even after we called their attention to it and asked them to make changes.
By the way, if a municipality (or any defendant) makes changes after an injury due to its negligence, the fact that they made these changes (usually called “subsequent remedial measures”) is generally not admissible to prove negligence. This evidence rule is intended to promote safety, but the City of Kent apparently didn’t see it that way.
From 2016 to 2018 Washington Bike Law wrote the city of Kent on six separate occasions asking them to please make changes.
In our last letter before they hired a law firm to write our office to demand that we stop writing them, we wrote as follows:

Pedestrians and bicyclists using the marked crosswalk after waiting for the green light are lured into a false sense of safety while right-turning motorists are also given the green light.

Please let me know if the City has made any changes or, if not, if there anything I can do to convince it to do so before others are seriously injured or killed.

The lawyer representing the city wrote back in October of 2018 stating that “the traffic signals comply with applicable guidelines and accident data shows the intersection is safe.” The City made no changes to this intersection or any other similarly dangerous intersection, despite our multiple explicit warnings.

In November of 2018 a driver struck a woman pushing a stroller with two children in another marked crosswalk in Kent, killing the woman and injuring the children. The driver admitted that she saw another person in the crosswalk, but chose to turn anyway, intending to drive through the crosswalk in front of him. Instead, she killed the woman pushing the stroller, who was entering the crosswalk from the opposite direction.
Of course, what these drivers did was negligent. But in both these cases, the people using the crosswalks and the drivers turning through them had green lights. Drivers have a duty to stop for people in crosswalks.
But the real tragedy is that the City of Kent could have prevented this death and other serious injuries but chose not to act. This is Zero Vision.
A recent article in the Kent Reporter by reporter Steve Hunter entitled “Seven Months, Seven Pedestrian Deaths in Kent” provides a sad overview of how dangerous Kent’s streets are for pedestrians.

Adding insult to many needless injuries and senseless deaths, the article quotes Kent Police Assistant Chief Jarod Kasner  regarding the death of the woman pushing the stroller:

“We forwarded all the information we had to King County, we expect a decline on this,” Kasner said about whether a charge would be filed by prosecutors. “The suspect was sober and not on her phone, with no excessive speed or other contributing factors, it was truly a tragic accident.”

This was no accident. It was tragic that the driver chose to violate the law and drive into a marked crosswalk when she admitted that she saw another pedestrian in it.
This was no accident. This death was the direct result of what I am calling Kent’s #ZeroVision policy. The City of Kent knew or should have known that their crosswalks were a trap for pedestrians years before our client was seriously injured in 2016.
There can be no doubt that the City intentionally ignored our repeated warnings of this danger.  The City’s lawyer wrote in response to our last request to fix this danger:
“Obviously a city needs to follow the advice of traffic engineers– not lawyers– when deciding what traffic signals are appropriate.”
I can understand the defense lawyer’s point. But I wasn’t writing Kent so that I could write this now and say “I told you so.”  I really wanted safer streets. What did they want?
It remains to be seen what, if any, analysis the City’s traffic engineers did in our case. But the fact that so many people are still being injured and killed makes me think that the engineers should reconsider Kent’s #ZeroVision policy.