This was what I had expected to post yesterday to begin Bike to Work Month…. our bike lawyer Dave Catechi taking his boys to school on his way to work yesterday. 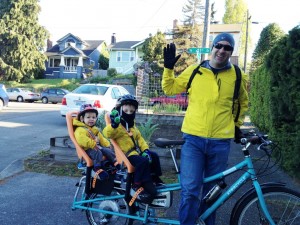 Today Dave, John McHale and I rode to Cascade’s Bike to Work Breakfast.  I am please to report that we all arrived safely.  We did not, however, all arrive on Dave’s bike.

This is not how Bike to Work Month should begin.  Someone was killed this morning, presumably riding to work.  I saw him on my ride in.

People are already speculating about what happened.  My job is to prove whose fault collisions were, but as a bicyclist I don’t want collisions to occur in the first place. 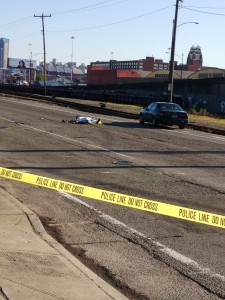 But now… what we’ve all been waiting for… there’s BIKE MONTH BINGO! 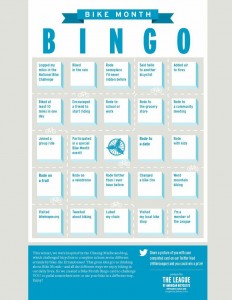 Today is the 40th anniversary of Federal Express, now known as Fed Ex. Although UPS started in Seattle as a bike messenger service, we have Fed Ex here too, as shown below, parked in a bike lane… 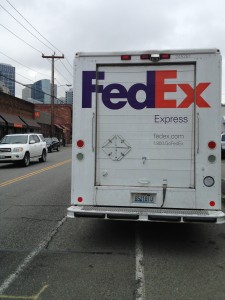 Interestingly, when Fed Ex trucks park in bike lanes and open their doors, their logo reads “FX”, which is also an abbreviation for “FRACTURE“… 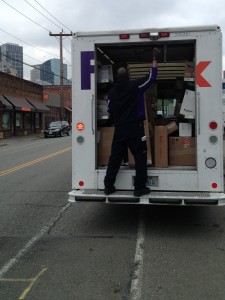 In more positive news today, a woman from the US is doing good things in Afghanistan.  Her good deeds include setting up women there with bicycles, the riding of which is still, according to Human Rights Watch, “generally considered immoral.”

Seattle’s Mayor McGinn was elected using his “Mike Bikes” campaign slogan.  His detractors sometimes call him Mayor McSchwinn.  And yet, despite the rhetoric, Seattle remains a dangerous place for bicyclists and pedestrians.

The Stranger was instrumental in electing McGinn and has been pushing him to embrace the bicycle-focus on which he was elected.  Bethany Jean Clement’s recent piece calls for bike-only streets running north-south and east-west through the city.     A Modest Proposal for Mayor McGinn: “I Know You Like Bikes” | Slog.

Ms. Clement’s idea  is worth talking about, but in the unlikely event that the City actually made two bike-only arterials, it would probably just increase tension between motorists and those who have reason to fear motorists.  Instead, Seattle should improve our laws to protect pedestrians and bicyclists everywhere in the city.  We could do this without closing down routes to cars.  How?  By changing the burden of proof to determine who is at fault when a motorist hits a bicyclist or a pedestrian.

The burden of proof should be changed so that drivers are presumed to be at fault if they hit a pedestrian or a bicyclist.  It is already the law that bicyclists are required to yield to pedestrians when riding on the sidewalk.  That is a good idea.  We should extend this concept.  For instance, it is also the current law that drivers must yield to pedestrians and bicyclists in crosswalks.  Yet, many people, including far too many Seattle Police Officers, are unaware of this.

I’ve talked about changing the burden of proof against motorists who hit bicyclists and pedestrians at the Road Safety Summit in 2011 and wrote about it in the King County Bar Bulletin in 2009.  This is the handout I’ve provided to Mayor McGinn and others.  My proposal is not perfect, but it is doable.  Numerous European countries have similar laws.  I have reached out to Cascade and to the Bicycle Alliance of Washington on this issue but they have yet to bite.  I’ve heard nothing from our mayor.  Interestingly, in 2012 the League of American Bicyclists contacted me to help work towards these laws nationally.