There’s a new PSA out from AAA, the American Automobile Association, which has been described by the Sierra Club as “a lobbyist for more roads, more pollution, and more gas guzzling” that actually seems pretty good.

What do you think?

Now that AAA likes bikes, will this be next? 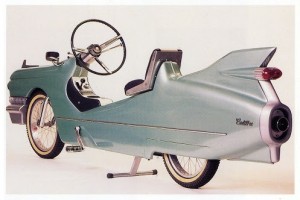 Commute Seattle is about to release a study on commute modes in Downtown Seattle.

But more people “telework/flex” (4%) than ride bikes to work (3%).  Who wants to bet which workers are more productive?  Yahoo anyone?

Perhaps the take-home on this is that driving to work downtown is no longer doable… 50% of people did it in 2000.

We most definitely do not recommend this approach to driving to work.

Bike Lanes are getting press again in NYC. A recent poll found that 66 percent of New Yorkers said bike lanes were a good idea while 27 percent called them a bad idea. Mayoral candidate Christine C. Quinn said she placed bike lanes “in the category of things you shouldn’t discuss at dinner parties,” alongside money, politics and religion. Not talking about transportation safety is probably not the best approach.

Bill de Blasio, New York’s public advocate, apparently annoyed bicyclists recently when he said where bike lanes have worked, “great, let’s keep them,” but “where they haven’t worked, let’s revise them or change them.” That seems to makes sense there and here.

The Bicycle Alliance says it’s “just common sense” to allow the crossing of “double yellow lines on an empty road to safely pass a person walking or biking on the shoulder”.  They “just want to make sure you don’t get a ticket for doing something so sensible.”  We agree.  But has anyone actually ever been issued a ticket for this?

Here is what the Bicycle Alliance says:  http://bicyclealliance.org/2013/02/11/its-just-common-sense-the-safe-passing-bill/

It would change RCW 46.61.100 to add a section that allows driving on the left side of the road “When overtaking and passing a pedestrian or bicyclist so as to maintain a safe distance of at least three feet”.  That sounds like a great idea, but do we need this law?

RCW 46.61.100 already allows driving on the left “When overtaking and passing another vehicle proceeding in the same direction under the rules governing such movement”.    Bikes are vehicles, so this is already legal.  We are skeptical that the 3 feet language here will make any difference.

As for pedestrians, known among the impatient motorist crowd as “obstructions,”  the current code also allows driving on the left  “When an obstruction exists making it necessary to drive to the left of the center of the highway; provided, any person so doing shall yield the right-of-way to all vehicles traveling in the proper direction upon the unobstructed portion of the highway within such distance as to constitute an immediate hazard”.  http://apps.leg.wa.gov/rcw/default.aspx?cite=46.61.100

The proposed legislation does not seem necessary.  And yet we share the Bicycle Alliance’s goal to increase the safety of bicycling.  Why not legislate something that would actually increase safety?

We support legislation that would make motorists who hit bicyclists or pedestrians presumed to be at fault.  This presumption could be overcome by facts like a bicyclist’s failure to use required lighting during the hours of darkness.  If drivers think that they will likely be found responsible for hitting a bicyclists or pedestrian, it won’t be a matter of measuring 3 feet– they’ll try harder to avoid running us down.

Imagine the scariest part of your bike commute being replaced by something better.  Not a sharrow.  Not a bike lane.  Not even a cycletrack.  But an elevated bicycle superhighway.  Impossible?  Why would you say that?  Los Angeles (of all places) built one in 1900… before its ugly love affair with the car. 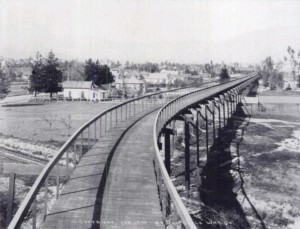